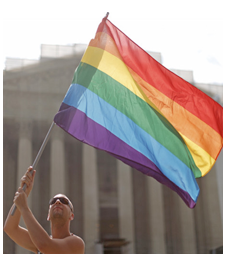 PERSPECTIVE - The dismantling of the Defense of Marriage Act (DOMA) by the Supreme Court was accompanied by the court’s gutting of the Voting Rights Act, legislation that moved the country incrementally closer to racial equality. The court dealt one blow for justice and another for injustice.

The twin decisions highlight the division between gay activists—mostly white people of privilege—and poor people of color, whose tepid gains in civil rights are being steadily reversed. The decision is a backhanded admission that money and privilege, even if you are gay, rule in corporate America, while people of color who live in poverty can expect nothing from the state.

GLAAD, the Lesbian, Gay, Bisexual and Transgender (LGBT) Media Group, along with 25 other LGBTQ organizations, issued a statement  expressing “acute dismay at today’s ruling,” referring to the court’s decision on the Voting Rights Act.

“The court has done America a grave disservice, and we will work with our coalition partners to undo the damage inflicted by this retrogressive ruling,” the statement read.

The gay rights movement, however, has not always used its resources to combat racial inequality, even among its own.

Marsha P. Johnson, a transgender woman who was a leader in the Stonewall Riots of June 1969 that sparked the movement for LGBTQ equality, was found dead in 1992 in the Hudson River. Despite evidence of a struggle, police ruled the death a suicide. The case was not reopened until 2012.

If Johnson were a gay, white male, her case would have galvanized the gay community. The danger is that as more states accept same-sex marriage, as the LGBTQ community becomes more broadly accepted, it can be seduced into the mainstream and forget the plight of the oppressed.

“I think white gay people feel cheated because they were born, in principle, in a society in which they were supposed to be safe,” James Baldwin once said. “The anomaly of their sexuality puts them in danger, unexpectedly.”

The LGBTQ community frequently defines itself as the new civil rights movement. This week’s ruling reveals the falsehood of that claim. As long as the LGBTQ community continues to co-opt the language of that previous and ongoing struggle, it must also remain true to the principle of equality and justice for all—not merely one’s own.

The LGBTQ community is dominated by white men of privilege. Its disregard for poor people of color is matched by its heedlessness of transgender people within its own ranks. Transgender people are at the highest risk for hate crimes. A 2011 study by the National Gay and Lesbian Task Force found that 78 percent of its trans-identified participants experienced physical assaults. For African-American transgender women, the violence was even worse.

LGBTQ organizations and activists will continue to fight for marriage equality in the 37 states in which marriage for gay and lesbian couples is illegal. But if marriage equality is the end goal of the LGBTQ movement, those involved run the risk not only of becoming part of the elite, but as well the forces of oppression they once had to fight.

(Todd Clayton is a graduate student at Union Theological Seminary in New York City. He is an LGBTQ advocate and freelance writer. In mid-June, he appeared on The Daily Show to dispute the claim, made by some evangelical preachers, that Christians suffer persecution for their vocal opposition to gay and lesbian rights. This perspective was posted first at TruthDig.com … an important progressive voice edited by Robert Scheer.)