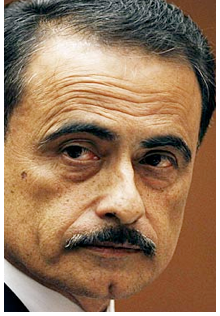 MAILANDER’S LA - The community of Sunland-Tujunga has been hoodwinked yet again on a development deal.

Unless something is done very, very soon--something entirely outside of the control to the obliging handmaidens to development at the Sunland-Tujunga Neighborhood Council--a huge housing development will replace the Verdugo Hills Golf Course.

"I can only assume that what went on [at City Council] is legal," a flustered Marc Stirdivant of Glendale-La Crecenta V.O.I.C.E, a non-profit group devoted to saving the Verdugo Hills Golf Course, a site that could soon be shuttered and graded for over 200 new homes, told me Monday.

What went on in Council was Councilman Richard Alarcon proposed on Friday that one acre of the twenty-eight acre golf course be set aside to recognize the golf course site's history.  The site was a Japanese American interment/intake center in WWII.

Stirdivant's group had tried to block the development by supporting efforts to emphasize the historicity of the site.  But the move backfired.  The Cultural Heritage Commission was angered by the linking of development and the historicity.  They agreed to work towards recognizing the site's history but divorced that effort from blocking the entire development.

Then Alarcon quickly used the argument for historicity as a way to move the developer and the city closer to a deal on the 28-acre site--and cutting out the development's opponents from most of the dialog.  The ploy to declare the site historic ironically moved city and developer far closer to a deal on the site, even framing the deal's terms with regards to how much land would be designated as historic.

"The councilmember was going to introduce an amended motion in which he would designate ... 10 acres as a historic site," Stirdivant of Glendale-La Crecenta V.O.I.C.E, a non-profit group devoted to saving the Verdugo Hills Golf Course, told me Monday.

The City denies this.  "Gerald Gubatan did not promise ten acres to GC V.O.I.C.E. Nor did anyone from Alarcon's office. The original site was historically ten acres. Alarcon attempted to designate it but the City Council directed that only the Oak Grove area, around 1 1/2 acres, be designated," a City spokesperson told me.

All parties agree that the "one-acre solution" appeared seemingly out of the blue in Council on Friday.  Stirdivant was reluctant to state that the solution confirmed that a deal had been privately reached between City and developer.

While Stirdivant was disconsolate about Friday's proceedings, the GC V.O.I.C.E's treasurer Fred Dong held out some hopes.

"We still can move forward on other fronts. There’s a whole long approval process if they do go ahead with development, several more stages, at any time in those stages we could potentially get council or Building & Safety to get someone in there and talk to the developer," Dong told me.

In the past few months, the community of Sunland-Tujunga has been told by GC V.O.I.C.E and their own Neighborhood Council that their efforts should be devoted to memorializing the history of WWII Japanese American detention at the site, rather than fighting the development more directly.

But to my mind, it is meaningless to memorialize the truth about the site unless it inspires us to tell the truth here in the present.

The truth is that laying aside one acre of land to commemorate Japanese detention in WWII, as was arranged by Alarcon's Council office, has simply proven to be one element of the development deal that has enabled and even sped up the development of the 27 other acres of the course.

The truth is that Japanese Americans in this development matter were used like an endangered species of butterfly, only this time not to block a development, but to speed it.

The truth is that Japanese Americans presently have twelve State Historic Monuments in California at which to contemplate the sad history of detention, including at Manzanar and at nearby Santa Anita and Pomona. Only a handful of Japanese Americans believe they should also have a thirteenth at the present site of the Verdugo Hills Golf Course.

And the truth is that in brokering this deal, the Council Office turned to their usual obliging grifters and incompetents at the Sunland-Tujunga Neighborhood Council, to spearhead an effort to try to baffle the community into thinking that they were doing something that might stop development--when they were really, once again, acting as its handmaiden to it--and as they recently did in making Sunland-Tujunga accept the Day Street complex for the homeless.

Six months from now, when the community of Sunland-Tujunga sees Caterpillars plowing and grading the 96% of the golf course that will be devoted to new development, they will also be able to observe how the 4% of the course devoted to adding a thirteenth Japanese detention historic site to a register of historic places was meant to stand as not as an obstruction to new development, but as part and parcel of it.