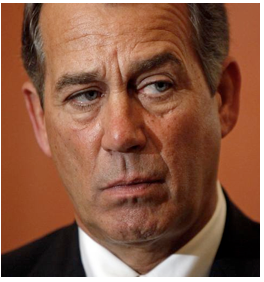 It's ironic that the Speaker's statement was made on the same day Gallup released the latest poll on the GOP's favorability -- only 39 percent of the country approves. The party hasn't sunk this low since May of 2010. Gallup didn't report on the gender breakdown, but it's a sure bet women are more negative than men.

Women have been ditching the Republicans for years. They're significantly more likely than men to identify as Democrats, and less likely to identify as Independents. And it's not just young women who have the most to lose with the GOP jihad against abortion and birth control. The party-identification gender gap is evident across all ages, from 18 to 85, and within all major racial, ethnic, and marital-status segments of society.

The newest attack on women does not come in a vacuum. In addition to this latest federal bill banning almost all abortions after 20 weeks (a direct challenge to Roe v. Wade which allows abortion until fetal viability), the party has been very busy with even more punitive bans at the state level. Eleven laws similar to the House bill have been enacted since 2010. In 2011-2012, 135 new laws limiting abortion went into effect.

House Republicans are also pushing for gigantic cuts to food stamps. Hello? Women and children are the major recipients of food stamps. Over in the Senate, the Republican tea partiers are trying to torpedo immigration reform, leaving families torn across borders and kids in foster care because their moms have been deported. This despite the shellacking the party took from Hispanic women in the last election, when 74 percent voted for Obama.

As for positive steps for women, the GOP refuses to take any. Paid sick leave is a huge issue for women, particularly those on the lowest income rungs. But the party says it would cost business too much. State Republican majorities have gone so far as to outlaw paid sick leave when cities and counties pass it. And speaking of low incomes, when is the last time you heard a Republican speak up for raising the minimum wage (mostly adult women workers) or passing the Fair Pay Act?

All of this is to say John Boehner is right. The latest assault on women's rights won't change women's opinion of the party. You heard it from their leader first.

(Martha Burk is the director of the Corporate Accountability Project for the National Council of Women's Organizations (NCWO) and the author of the book Your Voice, Your Vote: The Savvy Woman's Guide to Power, Politics, and the Change We Need. Follow Martha on twitter @MarthaBurk. Burk blogs at HuffingtonPost.com where this piece first appeared.)