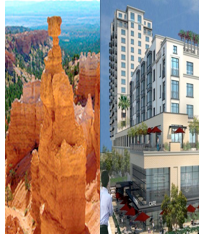 ALPERN AT LARGE - Spending time with my family, and a couple of other families who are close to us, in a year-long planned trip to Zion, Bryce and the North Rim of the Grand Canyon could have, and should have, been a time to relax and forget about problems at home.  Yet the Westside's (and the entire City's) crisis mode persists, as evidenced by our party sharing my grave concerns about the dreadful Casden Monstrosity that threatens to establish a bleak future for LA.

So in-between seeing nature's wonders, spending time with our kids, and even playing good Samaritan for a disabled man who was hurt on a remote trail until the rangers and paramedics arrived, we still wondered about this dreadful Casden-zilla project that represents all that is corrupt about LA, and which is an iconic example of why our new Mayor must share our outgoing Mayor's original visions ... but not his willingness to betray his constituents.

And it is an iconic example of why, after all this time, it DOES appear that our outgoing Mayor is willing to treat those who voted for him in the same manner that he treated his own family.  It is also an iconic example of why our new Mayor must both lead and respect, demand more of and fight for, Angelenos of all geographies and socioeconomic backgrounds...and that he must treat us with the same quiet, steady devotion he has for his own family.

Along with the ridiculously, intelligence-insultingly oversized Hollywood Millennium Project, the Casden Sepulveda project is an environmental and infrastructural disaster that threatens the very credibility of the otherwise-venerable causes of Mass Transit, Affordable Housing and Environmental Sustainability.

Here in Utah, which is hardly a liberal state, these causes have a great deal of credibility and respect by both residents and visitors alike.  Light rail transit is expanding in Salt Lake City, and both Zion and Bryce National Parks are primarily accessible by shuttles in order to sustain the viability of the roads, minimize the need for parking, encourage environmentally-smart transportation, and minimize human impact on Nature's greatest treasures.

However, the buzzwords of Environmentalism, Affordable Housing and Mass Transit can be warped and used (as they are for the Casden Sepulveda and Hollywood Millennium projects) for great harm--because if a powerful developer, enabled by someone powerful like, say, outgoing Mayor Villaraigosa SAYS something is environmentally wonderful then opposing it makes you a horrid NIMBY...

...even if you're an ardent environmentalist trying to speak truth to power.  And if this environmentalist (say, like myself or those from the Sierra Club and Friends4Expo Transit who actually fought former Mayor Riordan and Supervisors Yaroslavsky and Burke to create the Expo Line) claims that the Casden Sepulveda project is as transit-oriented as an iguana covered in dog fur is truly a dog, then we must hate dogs ... right?

And we probably hate kittens and babies, too, right?  But an iguana is still an iguana, and the Casden Sepulveda project is too outreach-deficient, environmentally-frightening, car-oriented, and oversized to be an example of proper Planning, whether it be car- or transit-oriented.

Neither the Casden Sepulveda nor the Hollywood Millennium projects are allowed in other cities, and they shouldn't be allowed--let alone enabled--in Los Angeles, either.  Neighborhood Councils opposing these projects have been as much a needed tool to fight Downtown oppression as any, and it's impossible for Angelenos to pay both for the lawsuits to fend off said oppression and the taxes that the same Downtown is itching to impose on them.

Yet lobbying is almost always what Downtown listens to the most, and skyscrapers--no matter how out of character and infrastructure-consuming they are for a neighborhood or region--are among the most lobbied issues at City Hall.

So with the understanding that the project sites for the Casden Sepulveda and Hollywood Millennium projects really are great locations for TRULY-transit-oriented and TRULY-environmentally-sustainable projects, wouldn't it be nice to ask for a few variants and create projects that offers both sacrifices but also benefits for a region...without the region being forced to enjoin lawsuits just to save their very quality of life?

Is it too much to ask that we pursue projects that might require variances...but won't require lawsuits because they're prima facie so huge and ridiculous that the City will be hurt, not helped, by their size, scope and inability for mitigation?

I guess it is.  After all, this is the LA of Mayor Villaraigosa and a City Council with a track record that has turned off most disillusioned residents from even voting.

So my vacation to Utah and Arizona, and my quality of life, as with the lives of so many Westside and other neighborhood and community leaders, has been seriously hurt by the Casden-Attack, and by the attack by the outgoing Mayor.

We can't sue Casden and the City for pain and suffering, but I wish we could.  And after communicating with my fellow devastated and terrified Westside neighbors, the view all the way from Zion/Bryce is clearly that:

1) As Friends4Expo Transit co-founder (and former Santa Monica Planning Commissioner) Darrell Clarke pointed out in a recent Times article, the Casden Sepulveda project is just too oversized and dense, has a Target store that is anything but transit-oriented, and is using the concepts of transit-oriented land use as a way to justify inappropriate overdevelopment.

2) For those of us on the Westside who took a stand and who endured withering (sometimes abusive) opposition from those neighbors who truly were NIMBY to join individuals like Darrell Clarke and fight for the Expo Line, and to vote for both Measure R and the near-successful Measure J to create mass transit, the united opposition of Expo Line-supporters against this project--and our being labeled as NIMBY's--is both appalling and horribly unfair.

3) As stated in the aforementioned Times article, the Casden developers paid $100,000 for the recent and voter-rejected Measure A to raise sales taxes, and the unswerving support of Mayor Villaraigosa and his arm-twisted and/or power-drunk Planning Department looks frighteningly like an in-your-face quid pro quo.

4) The Casden Sepulveda project, with its tying up of both car and bus traffic (remember...they use the same streets?) will impede regional Expo Line access and is already an obvious poor choice for a light rail line that is meant to fit into a neighborhood, not drop 12-17 story towers into a region predominated by two-story development.

5) The Casden Sepulveda project is everything that exemplifies poor Planning, with its rezoning flying in the face of the current Community Plan and hampering police/fire/first responder access to the entire region, and with families and seniors being housed in a freeway-adjacent industrial zone that will threaten both their health and the City's legal liability--City Attorney Trutanich weighed in, and it's hoped that City Attorney-Elect Feuer will do the same.

6) As industrial-zoned land gets gobbled up in a fire sale to politically- and financially-connected developers, and gets switched to inappropriate residential use--with over 150 units per acre being the "new normal" and with no reasonable or ethical ability to determine how water, sewage and other infrastructure can exist to support new megaprojects, it appears that L.A., and not Utah, can claim the mantle of the new lawless and wild frontier.

7) The precedent is being established, and will only be furthered if the Casden Sepulveda and Hollywood Millennium projects are approved by the City Council, that developers in L.A. can meet in useless meetings with the community, throw out a few bones to the L.A. Planning Politburo, and do whatever they want while claiming they did outreach to justify ENORMOUS variances from established legal policies and zoning laws.

I would like to reiterate that I was and am still a believer in the benefits of Environmentalism, Mass Transit, Affordable Housing and Sustainable/Smart Growth that is planned based on science and cost-effectiveness, and carried out by principled and ethically-unchallenged individuals.  Yet when planned and carried out by ruthless and ego-driven individuals, these causes can be used as weapons to paralyze and destroy a citizenry.

Kind of like in the City of Los Angeles, which is undergoing a process similar to that the Utah Tarantula Wasp does to Tarantulas when it's egg-laying time.  The Wasp paralyzes the Tarantula, lays its eggs, and the Tarantula can do nothing while the eggs grow, hatch and eat its way out of the unwilling host--which, of course, dies a horrible death in the process.

And here in Los Angeles, as visible all the way from Zion and Bryce National Parks, it's clear that otherwise praise-worthy causes are being horribly perverted and injected into our City, despite our rightful claims that these causes are NOT being carried out, that our City IS being destroyed, while being paralyzed and shut down by a top-down Downtown that is willing to betray and demonize those citizen volunteers who have the audacity to speak the truth.

(Ken Alpern is a Westside Village Zone Director and Boardmember of the Mar Vista Community Council (MVCC), previously co-chaired its Planning and Outreach Committees, and currently is Co-Chair of its MVCC Transportation/Infrastructure Committee. He is co-chair of the CD11 Transportation Advisory Committee and chairs the nonprofit Transit Coalition, and can be reached at [email protected]  He also co-chairs the grassroots Friends of the Green Line at www.fogl.us. The views expressed in this article are solely those of Mr. Alpern.