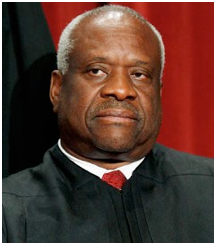 URBAN PERSPECTIVE - The U.S. Supreme Court is poised to hand down yet another landmark decision on an affirmative action case. The case is the lawsuit by white student Abigail Noel Fisher against the University of Texas at Austin in which she claims that race was a primary reason she was rejected for admission. The justices will rule in the coming days on the use of race in college admissions.

Many legal experts and court watchers bet that the court will once and for all scrap the last vestiges of race as a factor in school admissions and by extension in employment. There is no bet, though, on how one judge will vote. That judge is Supreme Court Justice Clarence Thomas.

His certain vote to uphold Fisher’s case and dump race into the dustbin of legal and social history is so sure it can almost be mailed in. Thomas loudly told the world what he thought of affirmative action six years ago in his memoir, My Grandfather’s Son: A Memoir by Clarence Thomas. Here are his words.

Affirmative action (though it wasn't yet called that) had become a fact of like at American college and universities, and before long I realized that those blacks who benefited from it were being judged by a double standard.

The problem with my "adverse impact" analysis, of course, was that it was of no help to those black students who had already finished law school and now found themselves unable to pass the bar exam.

The problems faced by blacks in America would take quite some time to solve, and the responsibility for solving them would fall largely on black people themselves.

Most of the middle-class blacks with who I discussed these policies argued that all blacks were equally disadvantaged by virtue of their race alone. I thought that was nonsense.

Affirmative action (though it wasn't yet called that) had become a fact of life at American college and universities, and before long I realized that those blacks who benefited from it were being judged by a double standard.

When Thomas casts his inevitable vote to expunge affirmative action, the one question that will and should be eternally asked of him is how and why someone who has been the biggest beneficiary of affirmative action could be the biggest hypocrite in opposing it. First, there’s the reminder of how much he’s benefited.

Despite his mediocre political credentials and undistinguished academic record, Thomas rose from junior Senate aide to Supreme Court justice in less than a decade. Here’s the parade of plum positions that he got: assistant secretary of Education for civil rights, chairman of the Equal Employment Opportunity Commission (EEOC), an appointment to the federal judiciary, and of course, Supreme Court judge. His quick rise up the political and legal ladder was all preceded by his race based admission to Yale Law School.

In his memoir, Thomas protests that he never actively sought these spots and pretends that he didn’t want them because of his deep fear that he would be permanently tarred as an affirmative action hire.

But no one twisted Thomas’s arm or put a knife to his throat and demanded that he accept any of these positions including admission to Yale Law School. He had a mouth and he could have opened it and said no every time he was offered a professional leg up. He didn’t. If Thomas had just taken the plums served up to him, and quietly melted into the woodwork with his titles, it would have been harmless enough. But he had a bigger agenda in mind, and that was to be an aggressive and relentless foe of the very affirmative action measures that he milked.

The Supreme Court post gave him the ideal power position to advance his agenda and do real damage. The pounding he took during his High Court confirmation fight in 1991 from civil rights, civil liberties and women’s groups, and the narrow Senate vote to confirm him stung deeply.

Thomas didn't forget or forgive. In fact, when asked how long he'd stay on the court, he reportedly said that he'd stay there for the next 43 years of his life. He was 43 at the time. In a more revealing aside, he supposedly quipped to friends that it would take him that long to get even. Whether this was hyperbole or an apocryphal tale, it didn’t take him 43 years to wreak his revenge.

He has been a one man wrecking crew on the court to expunge race from law and public policy decisions. However, this is not simply one man's personal bitterness over his alleged mistreatment by liberals and civil rights leaders. In well-prepped and orchestrated talks to ultra conservative groups, Thomas has pretty much made it clear that he’s on a mission to make sure law and public policy in America mirror his take on race.

The capper was his swipe at President Obama in of all things implying that he was an affirmative action President.

This is heady stuff for the son of a sharecropper who has been the biggest beneficiary of affirmative action. And, then makes it his sworn life’s mission to be the biggest enemy of, or more accurately, its biggest hypocrite.