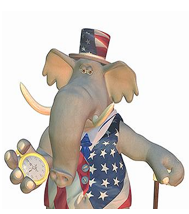 POLITICS - As a Truman-style Democrat left politically homeless, I am often asked about the future of the Republican Party.

Some Republicans want to push racial buttons on issues like immigration, or try to stop their political slide on gay marriage, which will steepen as younger people replace older people in the voting booth. Others think pure market-oriented principles will, somehow, win the day.

Ron Paul did best among younger Republican voters in the primaries.

Yes, ideas do matter, but a simple defense of free markets is not likely to have broad-enough appeal. What Republicans need is a transformative issue that can attract a mass base – and that issue is class.

Of course, the whole idea of appealing to class may be repellant to most libertarian-conservative or country-club remnants of the Republican Party. Yet, it's the issue of the day, as President Obama recognized when he went after patrician Mitt Romney. It also may be the issue Obama now most wants to avoid, which explains his current focus on secondary issues like gun control and gay marriage.

For their part, Republicans need to make Obama own the class issue since his record is fairly indefensible. The fortunes of the middle quintiles of Americans have been eroding pretty much since Obama took office in 2009.

There's nothing fundamentally unRepublican about class warfare. After all, the party – led by what was then called Radical Republicans – waged a very successful war against the old slave-holding aristocracy; there's nothing to be ashamed of in that conquest. Republicans under Abraham Lincoln also pushed for greater landownership through such things as the Homestead Act, which supplied 160 acres of federal land to aspiring settlers.

No one expects the Republicans to turn socialist, but they can reap benefits from anger over the crony capitalism that has become emblematic of the Obama era. Wall Street and its more popular West Coast counterparts, the venture capital "community," consistently game the political system and, usually, succeed. They win, but everyone else pretty much has to content themselves with keeping up with the IRS.

This is where the opportunity lies. Republican opposition to Wall Street is already evident in the rise of Texas Republican Rep. Jeb Hensarling to the chairmanship of the House Banking Committee. He and Iowa GOP Sen. Charles Grassley's attack on "too big to fail" banks are a stark contrast to the likes of New York Democratic Sen. Charles Schumer, the Capitol consigliere of the Wall Street oligarchs, or the prince of gentry liberals and defender of billionaires everywhere, New York City Mayor Michael "luxury city" Bloomberg.

Who's angry and ready to raise their raise their pitchforks? Try the self-employed, who are now, according to Gallup, the large constituency most alienated from the present regime. Even the hapless Romney picked up their support against Obama.

The new core constituency of the GOP can best be identified as the enterprise base. They include small property owners, mainly in the suburbs, those who are married or aspiring to be so. They are more suburban than urban, and likely to work for someone else or themselves as opposed to working for the state. Combine the top half of private employees, over 50 million people, add some 10 million self-employed and you get to a serious economic, and political, base.

This group also includes many immigrants, particularly Asians, a constituency that should be tilting GOP but still isn't. They, too, increasingly live in the suburbs, own homes as well as business. And rarely do they benefit from the prevailing crony capitalism.

The enterprise base is by nature not ideologically rigid. Most, if you talk to them, would generally support sensible infrastructure improvement as well as repairs; they also tilt towards restrained taxation and a lighter regulatory hold. It's a movement for "Let's get this fixed and get on with our lives."

This new orientation would define the Republicans where they are strongest and the administration weakest – on the economy. The new wedge issues must be for a "level playing field" for entrepreneurs and the middle class and definitely not social issues, like opposition to gay rights, or support for old and new unwise wars.

An enterprise approach, and a focus on restarting real growth, could put the Democrats on their heels and worrying about their own base. Minorities, for example, have done far worse under this administration than virtually any in recent history, including that of George W. Bush. For many, this has been what the Fiscal Times has called "a food stamp recovery."

Of course, Republicans have their work cut out for them among African-Americans. But remember that Barack Obama will not be on any future ballots. A return to what Ishmael Reed has called "neo-classical" Republicanism – the same spirit that freed the slaves and fought for equal rights – could make some inroads.

Latinos, the other major part of the party's "downstairs" coalition, also have fared badly under Obama and could be even more amenable to a smarter GOP message. They have seen their incomes drop 4 percent over the past three years, and suffer unemployment two full points above the national average. Overall, the gap in net worth of minority households compared with whites is greater today than in 2005. White households lost 16 percent in recent years, but African-Americans dropped 53 percent and Latinos a staggering 66 percent of their precrash wealth.

But the most critical potential constituency may prove the millennial generation, who hitherto have been a strong constituency for both the president and his party. They continue to suffer the most of any age cohort in this persistently weak economy. Already, the first wave of millennials are hitting their thirties and may be getting restless about being permanent members of "Generation Rent."

Let's say, in two or four years, they are still finding opportunity lagging? Cliff Zukin at Rutgers John J. Heidrich Center for Workforce Development, predicts that many will "be permanently depressed and will be on a lower path of income for probably all their [lives]." One has to wonder if even the college-educated may want to see an economy where their educations count for more than a job at Starbucks. Remember: Baby boomers, too, once tilted to the left, but moved to the center-right starting with Ronald Reagan and have remained that way.

Yet, despite these threats, Democrats may still be rescued by perennially misfiring Republicans. There's no Stu Spencer, Michael Deaver or Peter Hannaford on the blue team to plot strategy. Missteps remain endemic: A group of North Carolina Republicans recently proposed a measure to establish Christianity as the state religion, only to blocked by the state's leadership.

Others think opposing gay marriage is the ticket to revival, even though public opinion, particularly among the young, is swinging in the other direction. Some 70 percent of millennials – people in their early thirties and younger – support gay marriage, twice the rate of those over 50.

Social conservatives are also gearing up on the abortion issue even though three in five Americans, according to the latest Pew survey, oppose overturning Roe v. Wade. North Dakota could be showing that America can work, literally and figuratively, but instead the state passes abortion laws that are among the strictest in the country.

Yet, there's still hope that some Republicans will recognize this opportunity. I would like to see this, in part, because I have seen one-party politics in action here in California, and it doesn't work. Even more so, I'd like to see Republicans wage class warfare on behalf of the "enterprise" constituency because Democrats then would have to offer something in response, which could only have good consequences for the rest of us.

(Joel Kotkin is executive editor of NewGeography.com and is a distinguished presidential fellow in urban futures at Chapman University, and contributing editor to the City Journal in New York. He is author of The City: A Global History. His newest book is The Next Hundred Million: America in 2050, released in February, 2010. This piece was most recently posted at newgeography.com)