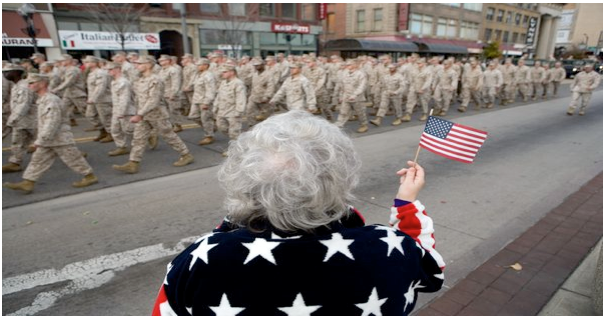 If that question seems ridiculous, it’s only because we have some mistaken ideas about both California and veterans.

The first common but incorrect belief is that California is the national capital of veterans. Yes, the state is home to more veterans—1.9 million—than any other state. And yes, California has been known as a place where veterans go to live out their lives in sunshine. (That’s one reason why CBS has set a top-rated show about Naval criminal investigations, NCIS, in Los Angeles.)

But the Golden State is actually one of the least popular places in the country for vets to live. California now ranks 48th among the states in the percentage of veterans among its adult population, at 8.8 percent.

Over the last decade, the state lost more than 20 percent of its veteran population (significantly exceeding the national decline in the population of veterans). And Los Angeles and San Francisco, cities that owe no small part of their prosperity to veterans of generations past, have some of the lowest percentages in the United States.

The second wrong but common idea is that vets represent a burden on society (albeit one we are proudly obligated to carry). It’s understandable that people think this way, given that media outlets, when they pay attention to veterans, report mostly on problems such as violence, mental illness, homelessness, unemployment, or the cost of caring for vets of the past decade’s wars.

But such reports obscure the fact that veterans, by most measures, are doing better than the population as a whole.

Take suicide statistics. For all the recent stories about the spike in suicides among active duty military and veterans, suicides among veterans account for a shrinking percentage of the country’s rising number of suicides. The transition from a military culture to a civilian culture can be difficult for vets, but, in time, as veterans find that first job and settle down in a community, they do well. Overall, veterans are healthier, more likely to be married, and more likely to be high school graduates. They also make significantly more money than the average American.

Given those statistics, we should be thinking of veterans not as people who need assistance but as the type of people California needs more of. Younger veterans represent demographics and bring skills that make them a very good fit for our state today.

Despite a high unemployment rate, California is short on educated workers with technological skills, and surveys show new vets are tech-savvy. In recent years, the percentage of vets with college degrees rose, while the percentage of Californians with degrees declined. California is also heavily urbanized, and studies show that the veterans who do best are those who make their homes in urban areas.

So why don’t more veterans come? For one thing, over the past two decades, the state has lost military installations and seen declines in the defense industries that employ many veterans. For another, the high cost of living and housing is a deterrent for people who have a ton of future potential but not much present-day wealth.

California state and local governments offer all kinds of fine programs for vets, particularly disabled vets, that make it easier to find jobs or housing, start a business, secure a government contract, or go to a state park. But most of these are small-bore programs pitched for what they can do for veterans.

Why not think bigger—and about what vets can do for California?

Why not offer enormous incentives to vets who would buy homes in areas hit hardest by the housing crisis? Why not recruit vets who have helped rebuild other countries to help address the state’s estimated $800 billion in unmet infrastructure needs? And why not be even more aggressive in recruiting vets as college students?

Being welcoming to vets is good for communities. Poway, a three-decades-old town of about 50,000, has long been a haven for vets, who account for nearly one in seven adult residents. Poway is growing and relatively wealthy, and it has the best hiking trails and the lowest overall crime rate of any city in San Diego County.

In 2010, at a time when the state was threatening to close parks, Poway opened a new one: Veterans Park. Last week, the city council voted to provide free business certificates and home occupation permits to veterans and active duty military.

Penny Riley, the Poway city manager and a Navy vet, told me, “There’s more we can do.”

Yes, there is, and not only out of patriotic duty, but also out of calculated self-interest.