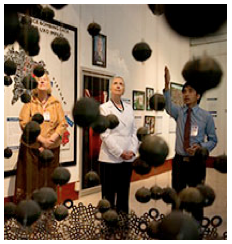 WAR ON TERROR - The horror of Boston should be a reminder that the choice of weaponry can be in itself an act of evil.

“Boston Bombs Were Loaded to Maim” is the way The New York Times defined the hideousness of the weapons used, and President Obama made clear that “anytime bombs are used to target innocent civilians, it is an act of terror.” But are we as a society prepared to be judged by that standard?

The president’s deployment of drones that all too often treat innocent civilians as collateral damage comes quickly to mind. It should also be pointed out that the U.S. still maintains a nuclear arsenal and, as our killing and wounding hundreds of thousands of innocent Japanese demonstrated, those weapons are inherently, by the president’s definition, weapons of terror.

But it is America’s role in the deployment of antipersonnel land mines, and our country’s refusal to sign off on a ban on cluster munitions agreed to by most of the world’s nations, that offers the most glaring analogy with the carnage of Boston.

To this day, antipersonnel weapons—the technologically refined version of the primitive pressure cooker fragmentation bombs exploded in Boston—maim and kill farmers and their children in the Southeast Asian killing fields left over from our country’s past experiment in genocide. An experiment that as a sideshow to our obsession with replacing French colonialism in Vietnam involved dropping 277 million cluster bomblets on Laos between 1964 and 1973.

The whole point of a cluster weapon is to target an area the size of several football fields with the same bits of maiming steel that did so much damage in Boston. The International Committee of the Red Cross, which has been active in attempting to clear land of remaining bomblets, estimates 10,000 Lao civilian casualties to date from such weapons. As many as twenty-seven million unexploded bomblets remain in the country, according to the committee.

Back in 1964 at the start of that bombing campaign, I reported from Laos, an economically primitive land where a pencil was a prize gift to students. It is staggering to me that the death we visited upon a people, then largely ignorant of life in America, still should be ongoing.

The technology to manufacture the cluster bombs and the deadly bomblets they contain has since expanded to most of the world, and they have been used by at least 15 nations. As a recent Congressional Research Service report noted:

“Cluster munitions were used by the Soviets in Afghanistan, by the British in the Falklands, by the Coalition in the Gulf War, and by the warring factions in Yugoslavia. In Kosovo and Yugoslavia in 1999, NATO forces dropped 1,765 cluster bombs containing approximately 295,000 submunitions.

“From 2001 through 2002, the United States dropped 1,228 cluster bombs containing 248,056 submunitions in Afghanistan, and U.S. and British forces used almost 13,000 cluster munitions containing an estimated 1.8 million to 2 million submunitions during the first three weeks of combat in Iraq in 2003.”

Israel is said to have dropped almost 1 million unexploded bomblets in Lebanon in the 2006 war against Hezbollah, which fired 113 cluster bombs filled with thousands of bomblets at targets in northern Israel.

I list all those dreary statistics to drive home the point that the horror of two pressure cooker bombs in Boston that has so traumatized us should help us grasp the significance of the 1.8 million bomblets dropped in Iraq over a three-week period.

Obama was right to blast the use of weapons that targeted civilians in Boston as inherent acts of terrorism, but by what standard do such weapons change their nature when they are deployed by governments against civilians?

On Aug. 1, 2010, the Convention on Cluster Munitions, banning such weapons, became a matter of international law for the 111 nations, including 18 NATO members that signed the agreement. The US was not one of them. Current American policy, according to the Congressional Research Service report, is that “cluster munitions are available for use by every combat aircraft in the U.S. inventory; they are integral to every Army or Marine maneuver element and in some cases constitute up to 50 percent of tactical indirect fire support.”

However, there is new legislation pending in Congress that would require the president to certify that cluster munitions would “only be used against clearly defined military targets” and not deployed “where civilians are known to be present or in areas normally inhabited by civilians.” Lots of luck with that.

(Robert Scheer is the editor of the progressive news and opinion journal Truthdig.com where this column was first posted. Visit Truthdig.com for the work of respected writers like Chris Hedges, Bill Boyarsky, Amy Goodman and more.)