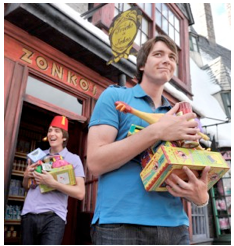 ALPERN AT LARGE - Although the City of Los Angeles appears to never take a vacation from hurting or constraining its citizens (indeed, some of the most harmful City back-room deals, critical publications and law-bending or even breaking proclamations occur during holidays), its citizens need to take vacations with their families.

And I love my family--the one that supports me in all my work and civic activities--so I figured I owed them the fruits of my 6/7-day, 3-job workweek.  Hence it was off to Florida to visit relatives...and, of course, Orlando.

The surprises and lessons, both good and bad, taught me much of what Orlando and Southern California alike can offer our children (both adult children at-heart and true children) who need--more than ever--an opportunity to escape our ever-pressured modern era.  Gobs of schoolwork, rising taxes and cost of living (let's not "kid" ourselves...inflation from rising gas prices, food costs and the costs of raising children are higher than ever) make a vacation more attractive, albeit painful to fund, than ever.  So what did my family and I discover in Orlando?

Well, beyond the costs (I'm sure I'm not the only one that has gone to Disneyland, Lego Land, Sea World, Universal Studios, etc. and wondered what the heck I paid for), there's the working paradigms of different franchises that show effort, innovation and---most of all--an attention to detail that is the difference between a mere attraction and a true "experience."

ot to hurt anyone's feelings, and with the understanding this is just my own opinion and one probably influenced by being a middle-aged man versus a very young child, I was impressed by Universal Studios in Orlando and depressed by Disney World.

Universal Studios has a particularly prominent new attraction that has become a huge cash cow, and will be expanded because it is so outrageously popular:  The Wizarding World of Harry Potter.  The Magic Kingdom at Disney World (which is the central theme park in Southern California that is often synonymous with "Disneyland") has a new and improved Fantasyland.

Both are amazing, and both are still in the process of expanding, but until there is a new operating paradigm to its visitors at Disney World (and here at home in Disneyland), I am more optimistic for Universal Studios than I am for Disney.

Certainly, my perspective is influenced by the usual pairing of me and our twelve year-old son, versus my wife with our five year-old daughter, and certainly my son and I loved both the books and movies of Harry Potter (the movies were awesome, but the books are just true magic), but the Wizarding World of Harry Potter stunned and truly impressed my family, including my wife and daughter (neither who have read the books, and my wife only saw 1-2 movies).

I am certain that the pumpkin juice and butterbeer at the Harry Potter portion of the Universal theme park are anything but heart-healthy and sugar-free, but they are tasty and original--worth waiting in line for.  The Three Broomsticks pub had great food, to boot.

But it was the ambience of stepping into Hogsmeade with its snow-capped roofs, and the giant Hogwarts castle, and Honeydukes Sweet Shop, and Zonko's Joke Shop, other shops one would expect to see in Diagon Alley, and Ollivander's Wand Shop, and even the bathrooms with Moaning Myrtle calling out to you, that showed a loving attention to detail that would make one recommend this to others and--most importantly--the desire to go BACK.

In contrast, Disney World's Magic Kingdom, as with the Magic Kingdom at Disneyland (or, as I somewhat-accurately call it, "Disneyline"), is still obnoxiously-crowded, and has a Tomorrowland that is more nostalgic than it is futuristic and has rides that are decades-overdue in their need for refinement, upgrading, or downright replacement.  Much of the rest of the park is in a similar and dreadful state of disrepair...although the Hall of the Presidents is still a magnificent feature I cherished.

Universal Studios had an Express Pass that allowed one (either by paying more or by staying at an adjacent hotel) to have a fairly quick wait no matter what the time for the majority of rides that allowed such a pass, while in contrast Disney World still has an obnoxious Fast Pass system of reserving a single ride at a time that requires a return up to 2-3 hours later, and which kills the joy and spontaneity of going on a lot of rides in a fairly easy manner.

Universal Studios restricted access to The Wizarding World of Harry Potter--with holding pens of up to 75 minutes for enthusiastic visitors--in the middle of the day when attendance was at its peak, while Disney World still tries to pack as many people as possible into as small a space it possibly can to (evidently) make as much money from as many visitors as possible.  Perhaps there are more visitors to Disney World's Magic Kingdom than there will ever be at Universal Studios, but it's clear that Universal Studios wants your business more, and Disney wants your money more.

There are certainly good meals, souvenirs and hotel accommodations near or even at Disney World (but oy vey, the price!!!), yet while it is probably a great experience for parents with very small children who are easily mesmerized, the love and enjoyment of its attractions that I remembered as a kid (and to which I returned many, many times) are lost quickly on both adults and older children.  Certainly my twelve year-old son is much more bored with the ossified Disney rides than I remember being when I was his age--when the rides were newer, and when the lines were a littttle long and not all 75-90 minutes long.

I'm quite aware that children today have more TV channels, more entertainment choices and are more easily bored than when I was a kid...but it is still clear that Universal in Orlando wants ambience (its other themes in their amusement parks also showed evidence of really trying to make its visitors feel transplanted into imaginary worlds quite different than our own reality), while Disney in Orlando is content with complacence.

It will please both Harry Potter fans and amusement park fans to know that the Wizarding World of Harry Potter will (if the rumors are correct) expand to have a Gringotts Bank (probably with a roller coaster as we saw in the movies) and a Hogwarts Express trainride linking the two Universal theme parks.  It's such a cash cow that--as far as a Harry Potter fan/nerd like yours truly is concerned--half the whole doggone park can switch over to this theme:  the Ministry of Magic, the Burrow, the Shrieking Shack, Diagon and Knockturn Alley, and especially the Forbidden Forest all await!

Yet so, too, do all the potential additions to Tomorrowland, Adventureland, the rest of the Magic Kingdom and the other Disney theme parks...but it does appear that Universal will add or change its parks with care and love for its visitors, while Disney is happy to sit on its laurels and especially its ongoing and limitless profits.

Which is a shame, because I doubt that's the way Walt Disney would have wanted things to be after his death--I think he would have wanted his legacy, and the park's legacy, to always show progress and innovation that would make visitors jaws drop and their hearts skip a few beats.  Money was nice, and necessary, but to Walt Disney he loved the WOW factor both to children and adults alike...and if the world was changing with respect to its pace or entertainment choices or attention level, he would still have wanted his Disney theme parks to be at the cutting edge.

Walt Disney knew and appreciated magic and love, but right now those features of magic and love are best found with those who work with and live up to the standards of one J.K. Rowling, author of the Harry Potter books, and to whom both movie directors and other collaborators still go out of their way to impress in a world that likes winners, sincerity and authenticity.

And if one is to spend and run around like a maniac in an amusement park (of which I am one of the throngs of attendees who do just that), I'm pretty sure that magic and love are in short enough supply to be both marketable and fun in the 21st century Universal Studios as much as they were (and still are) in what used to be during the past century in the Happiest Place on Earth.

(Ken Alpern is a Westside Village Zone Director and Boardmember of the Mar Vista Community Council (MVCC), previously co-chaired its Planning and Outreach Committees, and currently is Co-Chair of its MVCC Transportation/Infrastructure Committee. He is co-chair of the CD11 Transportation Advisory Committee and chairs the nonprofit Transit Coalition, and can be reached at  [email protected] This email address is being protected from spambots. You need JavaScript enabled to view it.   He also co-chairs the grassroots Friends of the Green Line at www.fogl.us.   The views expressed in this article are solely those of Mr. Alpern.)