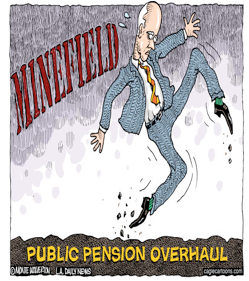 Over the next four years, the City Administrative Officer projects that pension contributions will grow another 50%, to almost $1.3 billion, representing over 25% of the City’s General Fund budget in 2017.

The unfunded liability of the two pension plans has ballooned by $1 billion a year over the last seven years, from $4 billion (84% funded) to $11.5 billion (72% funded).

Furthermore, if a more realistic investment rate assumption were used instead of the overly optimistic 7.75%, the funded ratio would drop below 60%.

In reality, this press release is a crude shot across the bow of LA 2020, warning the 12 members of this downtown centric commission that pension reform is not on the table for discussion and therefore, non-negotiable.

However, this press release also calls into question the independence of Tyler Izen, the President of the PPL and a member of LA 2020.

His independence has also been questioned as the PPL was a major contributor to numerous political campaigns, including to Herb Wesson’s Yes on Proposition 30 slush fund that supported the permanent half cent increase in our sales tax to a staggering 9½%.

Of course, there are legitimate concerns about whether the downtown and City Hall centric LA 2020 commission is truly independent and representative of the citizens and the economy of our City.

For example, the LA 2020 members have an average age of over 65, are for the most part home owners with an average household income over $500,000, and more than likely, toed the party line and favored Proposition A, a measure that was soundly rejected by 55% of the voters.  (Note: Valley resident David Fleming was a cosigner of the Opposition Argument to Proposition A.)

These 36 volunteers represent not only the diverse ethnic nature of our City, but more importantly, reflect the economic diversity of our City, ranging from home owners to renters, who work in all phases of our economy, including construction workers, nonprofit employees, independent contractors, housewives, retirees, and employees of small, medium, and large businesses.

Importantly, almost half of the Budget Advocates are not baby boomers, but were born after 1964 and are going to reflect the views of the next generation who are going to be stuck with a never ending Structural Deficit and the $30 billion bill for unfunded pension liabilities and a broken infrastructure.

The Budget Advocates also have an excellent understanding of the City’s operations and budgets.  For example, several Budget Advocates have a strong working knowledge of healthcare benefits, emergency medical services, and pensions which allows for greater insight and a more thorough analysis.

Last week, the Budget Advocates had a very constructive meeting with Mayor Villaraigosa and members of his budget team where they outlined and discussed their 16 recommendations that will generate new revenue and additional savings of over $200 million. (Link)

LA 2020 is an excellent concept, especially since we will have a new mayor and seven new Council Members, none of whom have presented any concrete ideas for budget, pension, and work place reform.

But as it stands, LA 2020, a commission established by City Council President Herb Wesson and downtown Los Angeles lawyer Mickey Kantor to “review how the City of Los Angeles can help grow the economy and jobs, attract business investment and industry, and create fiscal stability for the City,” lacks creditability because it does not represent the ethnic, demographic, and economic diversity of our City.

LA 2020 is too important to our increasingly insolvent City to be hijacked by an “Unholy Alliance” consisting of the political establishment that occupies City Hall, the Los Angeles Chamber of Commerce, the public labor unions, and the rest of the downtown ring kissers who are feasting at the expense of hard working Angelenos.

LA 2020 must earn our trust and confidence by reconstituting its membership to better reflect LA’s demographic and economic diversity, by firmly establishing its independence, by reaching out to the public on a regular basis, and by recommending and implementing real budget, pension, and work place reform.

(Jack Humphreville writes LA Watchdog for CityWatch. He is the President of the DWP Advocacy Committee,  the Ratepayer Advocate for the Greater Wilshire Neighborhood Council, and a Neighborhood Council Budget Advocate. Humphreville is the publisher of the Recycler Classifieds -- www.recycler.com. He can be reached at: lajack@gmail.com. Hear Jack every Tuesday morning at 6:20 on McIntyre in the Morning, KABC Radio 790.) Graphic credit: LA Daily News.
-cw