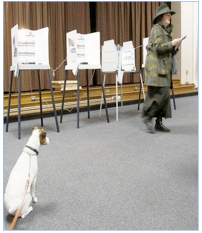 ELECTION 2013 - “The world is made for people who aren’t cursed with self-awareness.” – Annie Savoy says of Nuke LaLoosh in the film Bull Durham

Nuke Laloosh, the minor league pitcher who lacked such self-awareness, has nothing on California pundits.

Since the Los Angeles mayoral election in early March, the state’s good-government-oriented pundits have been lamenting the low turnout and lack of engagement characterized by the race. Some have offered ideas for fixing it. Mail balloting was a popular suggestion on this site.

What’s funny about these laments is that many of these same pundits have praised the state’s top two as a major political reform that’s giving us better elections.

That’s right. The LA elections are, like state elections after 2010, a non-partisan top two system. All the candidates, regardless of party, appear on the ballot in the first round of voting. This is mistakenly called a primary – because California reformers and media lack self-awareness about the reforms they’re pushing — even though it’s the opposite of a primary, because the top two abolished primaries because primaries give more power to parties. The first round is actually a general election; the second round is a runoff. Though the more accurate name for this first round, as my California Crackup co-author Mark Paul has suggested, is “the cluster%$!&.”

In LA, that cluster%$!& produced a confusing, wide-open, dispiriting race that didn’t clarify much and was won by the two candidates with the most money. Those candidates moved onto the second round, the bloodbath, which is pretty much all about negative campaigning.

Greuel has responded to this challenge with impressive pandering to every constituent group possible. She’s run as a former Republican pro-business candidate in conservative areas and as a lefty who will protect the public employee unions in liberal areas. The strategy is based on low turnout and on two principles: first, that no one is paying attention and second, that no one in LA will talk to other people in LA about these mixed messages. This may well prove to be a winning strategy.

Garcetti’s strategy has been to, after a lifetime of working for progressive causes, to run as the conservative, pro-business alternative in the race. And to take on the unions that have been among the biggest backers of his political career.

Good luck to the voter who wants to know what these two will do in office. Such a voter doesn’t have a prayer of achieving any real understanding.

To read commentary on this election, you’d think that LA, and this mayor’s race, is some sort of aberration. It’s not. This is the sort of election that Californians have designed for themselves, in the name of reform. When you look at the LA race, you’re looking at your future.

(Joe Mathews is Journalist and California Editor, Zócalo Public Square, Fellow at the Center for Social Cohesion at Arizona State University and co-author of California Crackup: How Reform Broke the Golden State and How We Can Fix It [UC Press, 2010]. This column was posted first at FoxandHoundsDaily.com)