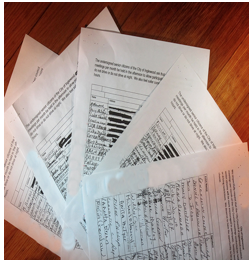 INSIDE INGLEWOOD - A petition allegedly signed by 131 Inglewood residents remains under investigation for the document’s validity.

The petition was proffered by Inglewood city clerk Yvonne Horton during the January 15 city council meeting. She later claimed it was handed to her "by an old woman." When asked if due diligence was performed regarding the validity of the signatures, Horton would say only that they were “checked against the voter lists.”

The petition was the primary subject during the January 15 city council meeting.

The topic that appeared to be of interest to many people commenting was item DR-1 on the January 15 agenda. Titled “Modification of City Council Meetings,” the item claimed that “[o]n December 17, 2012, the City Clerk’s Office received a petition from an Inglewood senior citizen signed by 131 senior citizens regarding a requested change in meeting times of the Inglewood City Council.”

A number of those whose signatures were alleged to have been in favor of the daytime meetings have had relatives speak out against what they feel was a deceptive measure to acquire the signatures.

“The people on this so-called petition were the same people who signed in and attended a holiday party at Westchester Villa,” stated Diane Sambrano. Sambrano’s mother was one of those who claimed to have signed not signed the petition but a holiday party sign-in sheet. The elder Sambrano’s signature is at the top of one of the sheets.

At the January 15 city council meeting, a number of alleged residents spoke during both comments segments.

One speaker announced her name as Lisa Alarcon and claimed to be an AARP representative. Alarcon departed immediately from the podium after her comment and could not be reached for comment.

Another speaker in favor of the daytime meetings was Derek Steele, who spoke during both the meeting’s public commentary periods.

At the open comments segment of the meeting, Steele admitted that “the people who didn’t come, who probably signed the petition, want [their] meetings.”

Steele went on to express his desire to drive seniors to the daytime meetings once they started.

Mr. Steele, reached by telephone days after the January 15 meeting, said, “People go to the city to present the opinions of others, which I was down there to do that night.”

Steele is the Civic Engagement Programs Director at Social Justice Learning Institute, a non-profit to which D’Artagnan Scorza is Executive Director and Founder.

The petition's authenticity remains under review. The city clerk has been challenged regarding the validity of the signatures with respect to the petition on which they appear, and has yet to respond.

Under California Government Code 6200-6203, "Every officer having the custody of any record, map, or book, or of any paper or proceeding of any court, filed or deposited in any public office, or placed in his or her hands for any purpose, is punishable by imprisonment pursuant to subdivision (h) of Section 1170 of the Penal Code for two, three, or four years if, as to the whole or any part of the record, map, book, paper, or proceeding, the officer willfully does or permits any other person to do any of the following:

(a) Steal, remove, or secrete.

(b) Destroy, mutilate, or deface.