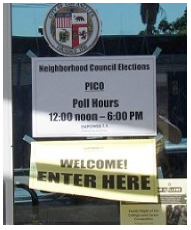 NEIGHBORHOODS LA - Neighborhood Council executives throughout the City are up in arms at the news that their budgets may take a hit next year to pay for their local NC elections.  Many complain that this proposal is in retaliation for the fact that the vast majority (some say 95-percent) of these community leaders urged a “NO” vote on Proposition “A” – the sales tax increase ballot measure a week ago.

When the City’s Neighborhood Council Budget Advocates meet this Saturday, March 16, to make recommendations for the Mayor’s 2013-14 City Budget, you can be sure that this topic will be high on the list of discussion.  Unlike previous semi-annual NC budget conclaves held at City Hall, this week’s gathering will be broken up into four venues for various regions of Los Angeles:

An estimated ten thousand stakeholders in Los Angeles recently completed a Budget Survey, which asked questions and sought opinions about city spending and how to pay for it.  The results of these questions will be announced and debated at these meetings.

The actual cost of neighborhood council elections varies widely upon the size of a NC, and how much effort the local board members want to spend advertising their local election.  The cost of “outreach” also varies, depending upon whether the council wants to finance area-wide mailings – or simply put up a few posters.

The Department of Neighborhood Empowerment, the branch of city government which oversees all 95 neighborhood councils in Los Angeles, would like all governing boards to put a maximum effort into these elections.  But a political reality is that local politicians, even at the neighborhood council level, are usually not motivated to have themselves replaced.

For example, the two Westlake Neighborhood Councils (North and South) put in a very minimal outreach effort for the 2012 election cycle, and most of the local board members were returned to their positions on the 15-member governing boards.  Some NCs, especially in the San Fernando Valley, spent thousands of dollars promoting their elections, with candidate forums and advertising.

With the upcoming Los Angeles fiscal forecast estimated at anywhere from $200 to $800-million in the red, depending on whose figures you believe, the question is who is going to pay for the ever-increasing salaries and pensions of city workers, and the services the public demands?

One of the inequities that no one wants to face is the fact that ALL 95 neighborhood councils receive the same amount of taxpayer money to spend, regardless of the size or population within each NC.  It used to be $50,000 per year.  When the economy tanked, it was reduced to $42,000, then $37,000, and now it is estimated that each next year’s NC budget will drop to only $25,000.

Every city department has been required to take a hit in their budget for 2013-14, which will cause a continuation of reduced services and a hiring freeze.  Why do the local neighborhood councils believe that they should be exempt from these necessary cuts in funding?  Many NC board members are demanding that we return to funding these community elected bodies to the former $50,000 level.

Unfortunately, for all the efforts going into budget forums, and outraged letters to editors, the fact is that a small number of greedy politicians – you know who they are – will ultimately decide who benefits, or suffers from how our decreasing resources are spent, and the local unions are the only ones who will have a seat the table.

(Jennifer Solis is a graduate student and elected board member of the Westlake North Neighborhood Council.  She takes comments at Cyberdiva@ca.rr.com)