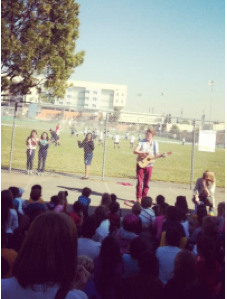 EDUCATION POLITICS - It’s quite true:  before the beginning of this year, I did not know my school board member’s name.  I had – still don’t, really – practically no idea what a school board or its members do.  I knew that public schools were “ailing”; I knew that there is a vast racket afoot in the private sector to sell “education” at usurious rates to beholden parents – parents driven by a curious sociological phenomenon that renders them thoroughly devoted to their children’s welfare with a fierceness that displaces any last vestige of sense.

But I did not know anything at all about charter school’s (or their close cousin’s, the pilot school’s) predatory and phagocytic predilections.  I thought they were, in principle, an OK-enough idea, a place to jigger the ongoing effort to improve schooling.  An alternative to the vast juggernaut of conventional education.  A petri dish, a stillwater; a safe harbor for the out-of-the-ordinary.  My eldest attended one for a year – it was an abject failure in my opinion, but this didn’t discolor my allowance that the experiment was reasonable.  We considered another for middle school.

I simply had no idea that in my own modern day and age, there would be such childish adult behavior afoot as that which was so evocatively captured in It Happened One Night. Remember that movie where the woman (Claudette Colbert) constructs a barrier down the middle of the room with a bed sheet and instructs the man (Clark Gable) not to cross it?  You probably did that when you were a kid, too.  We did with chalk in the back seat of our car.

But that was screwball comedy; it’s not supposed to really happen, not among adults. I have been oblivious to the fact that this is precisely what’s been going on in schools all across the country.  While and because I was busy not-noticing, this shameful reality is enacted precisely. Here it is
depicted heart-breakingly at one of Los Angeles’ dozens of “co-location” school sites:

But my own denial notwithstanding, it is happening, everywhere.  Schools are being literally divided in half with chicken wire, services and amenities duplicated in separated but constitutionally unequal measures on either side … and this is happening in the school at the end of your street.  At your own kids’ school.  At my kids’ school.

Last week a no-need-even-to-add-water, cake-mix of a plan got dropped in my kids’ principal’s lap declaring that a portion of her vast, complex, busy High School would be carved up, fenced off and placed in the hands of a commercial outfit.  Their plan, such as the sketchy details suggest – would be to start up a “technology pilot” school with huge toy-fire-power.  It is backed, I think, by the private foundation of a software mogul and presumably many, many big expensive toys are planned.  If I have the details wrong, it’s because no one has seen fit to share them with me, one who would be displaced.

So that may sound well and good but … the school that’s presently on this site has a venerable tradition of excellence in math, science and engineering.  For years I recall that its students won national science competitions and contests.  It sends lots and lots of kids to a roster of elite colleges that the tony private school up the street would do anything (and does) to attribute (authentically) to its graduates.  It sports one of the most successful magnet schools in the district.  And remember, a magnet school selects on the basis of race alone, for the purpose of balancing enrollment in terms of race, not academic standards.

There is nothing cherry-picked about the academic potential of these students.  Not, that is, beyond the non-trivial willingness and ability of the involved magnet families to secure a spot for their child in this racially-prescribed subset of the vast urban unified school district.

So this High School houses a sub-school of racially balanced students that evince relatively remarkable academic metrics; the magnet school is a successful small learning community by data-driven standards.  And just within the past two months, the school board approved a plan to start up a second magnet sub-population on this same campus, this second devoted specifically to science, technology, engineering and math.

Here’s the part about this setting up of new, “smaller” schools that makes it all a shell game:  there’s no money allocated to start this new subschool.  Being a separate entity it requires considerable separate administration, it requires separate enrollment and counseling, there are rules about teacher certifications and separateness because as I understand it, the monies for this kind of school come from a different pot than the community at large’s.  Sometimes monies get promised and don’t appear – here it is; no, it isn’t!  It’s horrible.

Thus LAUSD has embarked on the challenge to recruit a whole new school from our population of locally eligible kids, appropriated zero funds to do so and then… invited a private school to set up shop right along the other side of a metaphorical sheet hung down the middle of the school. The schools will be different; that other school will have at its disposal a veritable boatload of money.

Nothing metaphorical about that. After all, technology costs – and nets — a lot of money. Ask any random software baron: that’s how he made his. Further, that software magnate is magnanimously willing to sell his products to the “public” school he has himself seeded so generously with startup funds. In fairness, he’d be willing to sell his products to the non-funded school too but guess what… they don’t have any money. In part because he just siphoned it through that alternate “quasi-public” entity he just propped up.

But why doesn’t the public school have any money? Who is “they”? In this case it is just WE. We are the local people who go to this school, the under-funded one. We have contributed a lot of tax money over the years the better that our children might be educated. And they have been, with scant resources at that. We, at this school, would like to continue educating our children within an administrative structure that permits us input: they are our children after all. At the end of the day it is I alone who fiercely loves my own. But by ‘thinking globally and acting locally’ we can enable a rising tide of educational benefit for all.

This is a scheme that works only if that tidal basin is not dammed. No one’s boat is rising when there is no money devoted to the project, sequestered privately for one small segment of the population.

And when you send a swamp’s worth of money overfilling the basin, then everyone already in it just drowns – with the exception of those riding the crest. The new kids, the ones on the forefront of this fancy new expensive school devoted to “hiring” the exact same subpopulation that the public magnet has been instituted to serve, these kids will ride a tidal wave of funding and attention and support. I am skeptical this will remain after the old population has been swamped out by them, but who can see the future, really.

I know only in the here-and-now, that this formerly glorious science-oriented high school is relegated to offering its AP Biology students labs designed for fourth graders:  picking through animal scat and shredding toothpicks.  Plenty can be learned in challenging circumstances with no “toys”.  But setting up shop right alongside of this depauperized environment, to teach the same material to a cherry-picked population – somehow this particular future scenario doesn’t seem too difficult to predict.

So I’m going to stick out my neck and do it.  It has not escaped the notice of the high-profile, for-profit educational concern that has informed us of this “done deal” to “colocate” at my children’s school, that this High School located just south of a major institution of higher learning in our country, is statistically less wealthy than communities located immediately adjacent to its north, yet houses a considerable number of economically stable and exceptionally well-educated families.

They will bait-and-switch these children from private schools their families are pedagogically committed to but can ill-afford, to the quasi-public for-profit that is so admirably poised to benefit financially, just the other side of that chicken-wire fence.  In the process they will also cherry-pick the remaining vestige of district-school-enrolled, academically-inclined public school pupils.

If the pilot school will accept the neighborhood child, it would be absurd to refuse state-of-the-art scientific amenities.  Everyone wants clean, fancy, brand-new toys.  Kids do, parents do, walking about with any manner of tiny cute computers in their pockets – parents aren’t denying themselves these percs and when the means are so blatantly and readily available, they will not deny it for their child either.

But who is not accepted into the privileged charter?  Who is to be refused entrance to the shiny new school of purportedly hyperbolic potential?  The children whose outcome measures are not predicted to be exceptional. In very short order the district school will atrophy academically with few of its scholars left.  Remaining will be the non-scientifically or even academically inclined.  Their average test scores will plummet.  Their teachers will be blamed, magically, for ‘inadequate teaching’, and the school will close.

The venerable, historical, community-esteemed neighborhood district High School will be forced out of business.  By its own constituency, the local people.  On behalf of a private corporation.

Someone will have snuck in during the middle of the night and taken over that fabled open campus, held a siphon below the spigot of public funds intended to educate our children and address the resulting shortfall either by (a) asking for money to make up the difference or (b) cutting educational quality to erase it.  Or both.  Typically charter schools in this neighborhood aimed at this demographic, request $4K “donation” annually from their “public” school pupils.  As well they require and track family “volunteer” hours.

More importantly, they will lose the social contract that insures a citizen assistance in educating their child should they develop “special needs”, should they happen to give birth to one of those individuals who is profoundly impaired or in some other way educationally “needy”.  I could not myself afford to educate one of these children:  none of us could.  But we can afford to live in and contribute to a society that sustains this risk by spreading its cost among the middle class thereby assuring support in the event of such unthinkable calamity.

As it happens, my own children do not need this resource-intensive assistance.  And probably yours don’t either.  But someone’s do, and when I opt into a democratic society and agree to live in an urban setting and pay taxes to a common kitty, it is precisely to enable there to be retained, in perpetuity, insurance for such families.  Because such families could be our family, and they compose our society.  They are the Village and we are they.  Because misfortune happens, and without a social contract we would be wiped out by it.  Without the assurances of a Village, who among us, apart from the über-wealthy (or callow young), could have the courage ever to start a family?