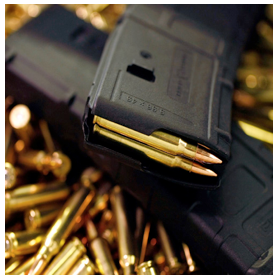 PERSPECTIVE - I am for putting strict limits on ammunition magazines as much as anyone else.

It’s the next best thing to curbing ownership of military-style assault weapons. After all, an automatic weapon with limited ammo capacity cannot cause as much potential carnage as it would with a full clip when it is in the hands of a maniac…or even an irresponsible, but otherwise sensible person.

Everyone recognizes that no weapons ban will completely eliminate risk any more than a driver’s license will prevent traffic deaths. Limiting firepower, however, will save lives and allow law enforcement a better chance of taking out a deadly shooter.

Passing legislation to limit capacity will be tough in the face of well-funded Second Amendment purists. I refer to them as purists because of their unbending belief that the Founding Fathers would have tolerated the potential of mass murder by individuals. It is reasonable to assume the framers of the Constitution could not have imagined the rapid technological advancement of the armaments industry. We’ve come a long way from a single-shot, muzzle-loading musket. They would have had a tough enough time grasping the availability of accurate and rapid-firing weapons in the American Civil War, much less the firepower in the hands of Seal Team 6.

The pushback from the purists can be overcome if there is enough support from the general population, but first, the politicians must recognize there is a wide range of views on the issue of arms ownership. It is not black and white. There are many citizens who would support curbs on deadly, death-spewing weapons, but they are also protective of the basic concept of the Second Amendment. I happen to interpret it as the right to protect oneself from deadly force. A well-organized militia is part of that concept, but it could apply to an individual who keeps a weapon available as a means of protection until law enforcement arrives.

It is important, then, to frame the debate in terms that do not threaten the broad views of honest, responsible citizens who would support limits on ammunition clips, if not on automatic weapons in general. The moment the debate shifts to, or even hints at, an either-or proposition on gun ownership, all hope will be lost of passing effective legislation.

That is why I am disturbed by City Attorney candidate Mike Feuer’s remark, as reported in the Los Angeles Daily News:

City Attorney Carmen Trutanich’s opponent, former Assemblyman Mike Feuer, testified before the committee in support of the measure, citing his background as author of a number of gun control measures during his years in the state Assembly and, before that, as a City Council member.

“This is the next logical step in gun control,” Feuer said. “There is no civilian who has a need for a high capacity magazine.”

My concern may appear to be splitting hairs on Feuer’s choice of words, but you cannot be too careful when you are addressing such an emotionally charged issue. The wrong words will be played over and over again in 30-second media spots. And too many people react to sound bites.

It is a huge mistake to apply the term “gun control” in any way, shape or form regarding one of the top hot buttons in American politics. You may as well wave a red cape in front of a bull.