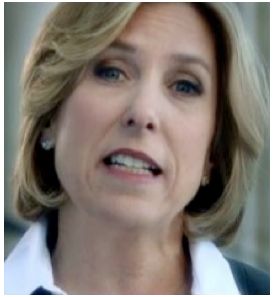 A few spaces left in her 140-character snarl, she closed her tweet with an ominous hashtag: "#No."

Helen Sanchez of Jan Perry's campaign--yes, Wendy Greuel is not the only woman running for Mayor--may have been more cutting still.

"I think it's ironic that Wendy's campaign focuses on the fact that she will be the first female mayor of Los Angeles," Sanchez told me, "when she is bought and paid for by almost all the rich male power brokers in the city."

And then I also asked Rebecca Chambliss--who once observed a paucity of women in local government and so ran for City Council herself--about Greuel's gender-based strategy.

"If a woman is going to be elected this time around, I'd rather see Jan Perry in office, at least she doesn't seem as contrived as Wendy," Chambliss said.

Wendy Greuel has indeed long been playing the woman-making-history card to get elected Mayor of the City of Los Angeles--longer than you may recall.  As City Controller--a four-year-span in which she did lots of campaigning and little controlling--she had many women's summits on this and that, all the while networking for the job she really wanted.

She's also distorted reality considerably along the way, and many have observed as much.

Greuel's claims to identifying waste and fraud have rung hollow with all media and almost all observers of LA politics.  If only she had spent some time meeting with Department heads, rather than running to television stations with her plug numbers, they say, she could have actually rendered some meaningful service to the City.

Among the top five candidates, at 51 years of age, Wendy Greuel has consistently shown the greatest indifference to playing fair.  That is unquestionable.  You could ask journalist Randy Economy about that--when Economy filed a report about Greuel's habits as controller, Greuel's team sent operatives to a press conference, to slime Economy--something we've never seen from a candidate for Mayor before.

The other candidates in the race have especially set sights on Greuel, each except for longshot Emanuel Pleitez citing her for outright dishonesty.  Garcetti's campaign has set up a website "wendygreuelsnumbers.com," which cites many media fiskings of Greuel's cooked books and concludes "it looks like people across Los Angeles agree that Wendy's numbers don't add up."  Kevin James has called her budget proposal and the fact that Greuel has hid her appointment book as Controller from public view "dishonest."  Jan Perry has persistently savaged her plug-numbers budget and other odd claims in mailers.

Greuel also "released" a poll this week--and even these numbers were suspicious.  Leaking it to the LA Weekly, they released figures--but not the name of the pollster.  The figures went against all other polls to-date and claimed that Greuel was in the lead.  Most cried foul, as media rarely cite polls without including the name of the pollster, and dismissed the poll as imaginary.  The Weekly, however, continues to cite the nameless poll from the nameless pollster.

Where do these kinds of actions come from? Chambliss had a theory.

"I think there is a stigma attached to women running for office," Chambliss told me.  "The public has an adverse reaction when a woman acts 'unladylike,' i.e., they come out swinging at their opponents, I experienced this first hand.  When a man does it, he's viewed as strong and aggressive…that he'll be a good advocate for the people.  But when a woman does it, she's viewed as a shrew or a bitch.  To differentiate oneself, the only other alternative is to trump up accomplishments and I believe this is what Wendy is doing.   She's making up stories or greatly exaggerating what she's done in order to try to stand out.  She's defending herself on her website which I find interesting."

It is little wonder then, in the face of all the ancillary charges of dishonesty or at minimum "trumping up," that Greuel has chosen to play up her gender as a defining part of her candidacy.  But it's also more complicated.  By birth, she is right between waves of feminism, a little too young to have lived the legacy of the first and second waves first hand, but she does not fit especially well into easier, breezier subsequent waves either.  Her top consultant, John Shallman, who is indeed older and much of the "legacy feminist" wave himself, appears beholden to a stridently legacy-feminist strategy that Megham Daum once said "can grate even on those who agree with her ideas."  It is a strategy that worked in the 1990s for Senators like Boxer (who ardently supports Greuel) and Feinstein but more recently proved a loser for both Hillary Clinton and Sarah Palin.  "Let's make history, it's our turn!"--turns out to be an easier sell only to sisters older than Greuel, and not to those women younger than she.

And the sell his become increasingly difficult as the first and second waves recede into retirement.  One-time LA City Controller Linda Griego, who was the first credible woman candidate to run for Mayor, recently said in a column at Zocalo that if either Greuel or Jan Perry win votes from females in this election, "it will be as candidates, not as women."

Chambliss--who trains hard at Cross Fit gyms and is strong enough to lift her nearly full-grown niece above her head--thinks most people simply don't vote gender at all.  "When I was running, the city was facing an all male City Council as well as male Mayor.  I did emphasize that fact and the only time it affected people at all is when I sent out a mailer with all the faces of the current city council with a 'what's missing?' message.  Most people said they never really thought about city leadership in terms of having women involved.  Clearly it didn't change how they voted in my case."

Greuel not only has taken a gamble aligning with the old wave strategy--she comes from the politics of another political epoch as well.  This epoch is spendy, union-beholden, and TV-oriented.  She and her top consultant come from a time when there was no social media and television mattered far more than it does today.

You can bet that longtime consultant Shallman advised her to get on TV as much as possible while she nominally served as Controller.  Top consultants love television ads--they're expensive, and the consultant's mark-up yields top dollar paydays.  Greuel and Eric Garcetti indeed have had dollars to blow on TV, as the unions have backed up their Brinks trucks to support the favorites.

But the degree to which the Greuel campaign has pushed Greuel's gender as a campaign issue has been both relentless and shameless--and likely misses with most women in all those waves subsequent to Greuel's.  None of Greuel's numbers have added up, either--none of them, neither on future budgets or past claims of uncovering waste and fraud, and women pay attention to such things.

Of course, Greuel's Agonistes-protege Antonio Villaraigosa has been both a liar of spectacular dimension and a feminist more in the tradition of footloose Bill rather than strident Hill.  The three affairs he had alone must have generated the kind of routine in which lying became pathological.

The public does not get a chance to hear much of the real personality or character of any particular candidate.  They know Eric Garcetti is generally nice and Jan Perry is generally brusk and Kevin James is generally gay and Republican and friendly too.  But they don't have a chance to learn much more than that about any of the candidates, because most journalists who report the race do not see elections from the public's perspective anymore.

LA media today are too close to the candidates to report their obvious character flaws, but the public is not close enough to detect them.  LA media today believe that the public--which doesn't pay attention to City pensions at all, and to City politics anymore than they do pensions--should suddenly over the course of a few days become expert in LA's various pension plans and problems, and inherent political problems, and should deeply care about how much money a candidate raises.  They don't much report what the public actually thirsts to know: fundamental, simple questions regarding whether a candidate is generally honest or dishonest, whether a candidate is a good manager or a bad manager, whether a candidate has accomplished much or little, and why candidates send out so much junk mail as an election approaches.

"I'd love to see a female Mayor of Los Angeles, but Wendy isn't the woman for the job in my opinion," Chambliss added. "She's not someone who stood up for the people of Los Angeles all the years she sat on the City Council and she certainly was careful as City Controller to not cross anyone she'd need support from while running for Mayor."

And if the journalism were better, at minimum the junk mail would diminish, and perhaps the public at large would even be well enough informed to shut out the TV ads too.  And if the public were closer to candidates, Wendy Greuel wouldn't be obliged to hazard the guess that simply being a woman is reason enough for her to be Mayor of Los Angeles.

That would please Lydia Grant, a Sunland-Tujunga education activist who is close to the Kevin James campaign.

"I choose the people who I choose to be my representative, not based on gender, or religion or anything. but on who would do the job best," Grant told me. "And when I've done things, I've never found that my gender has made a difference."