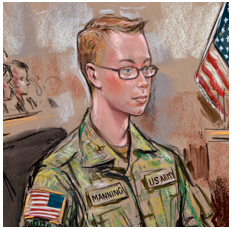 AND, WHAT LEAKED, WHAT DIDN’T - US Army Private Bradley Manning read a prepared statement on Thursday, revealing before a packed military courtroom exactly what government and military information he leaked to the whistleblower media outlet WikiLeaks, and why he chose to do so.

Manning has reportedly pleaded guilty to providing WikiLeaks with confidential military information though he has denied the most serious charge against him, "aiding the enemy."

According to FireDogLake's Kevin Gosztola, reporting live from the courtroom, Manning's plea makes possible two rulings by the presiding judge: "guilty to lesser-included offenses pursuant to the plea" or "guilty of the greater offenses in the original charges." The court cannot find him “not guilty” based on his plea.

Guardian reporter Ed Pilkington, also at the trial, said that Manning "confirmed he wants to be tried by military judge [Colonel Denise Lind] alone," with no military equivalent of a jury.

As part of his statement, Manning said that before turning to WikiLeaks he had attempted to contact both the New York Times and the Washington Post, but failed. In addition, he stated: "No one associated with WikiLeaks pressured me into sending more information."

In regards to his leak of the collateral murder video, Manning said, "I was disturbed by the response to injured children" and that the air weapons team who appear in the video "seemed to not value human life by referring to them as 'dead bastards.'"

Through his lawyer, David Coombs, the soldier pleaded guilty to 10 lesser charges that included possessing and willfully communicating to an unauthorized person all the main elements of the WikiLeaks disclosure. That covered the so-called "collateral murder" video of an Apache helicopter attack in Iraq; some US diplomatic cables including one of the early WikiLeaks publications the Reykjavik cable; portions of the Iraq and Afghanistan warlogs, some of the files on detainees in Guantanamo; and two intelligence memos.

These lesser charges each carry a two-year maximum sentence, committing Manning to a possible upper limit of 20 years in prison.

Manning also pleaded not guilty to 12 counts, including to the largest charge of "aiding the enemy," which would have supposed that he knowingly gave help to al-Qaida either by leaking secret intelligence directly or via its publication on the internet. He also denied that at the time he gave the information to WikiLeaks, he had "reason to believe such information could be used to the injury of the United States or to the advantage of any foreign nation".

According to Gosztola, Manning pled guilty to "all that was anticipated except he did not plead guilty to releasing the Granai air strike video."

(This report was written by Common Dreams staff and posted first at CommonDreams.org)