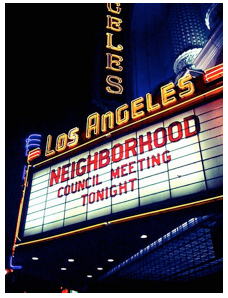 TALK BACK - In Tuesday’s CityWatch, Bob Gelfand of the Coastal San Pedro Neighborhood Council, likely set a new CityWatch record by having written a column of over 5,500 words.  That means that I at least tied a record for having read it all.

It’s something that should be read.  Bob has been active in the neighborhood council system since the first councils were being formed, and anyone who makes that kind of an effort to express their opinions deserves to have an audience. (Gelfand CityWatch article, “Enshrining Mediocrity: The Los Angeles Neighborhood Council System, Its Promise and Its Failures”)

For those who haven’t read it, here’s an executive summary:  Bob feels that the neighborhood council system needs to be redesigned so that residents can be made better able to fight the business community.

When the system was designed one of the goals was not duplicate something that already existed because the status quo wasn’t acceptable.

If the councils were comprised of just residents or the business community they would duplicate the work of existing residents’ associations and chambers of commerce.

If membership were to be further limited to registered voters, the new system would pick its leaders the same way that we select our elected officials and a lot of people would be left out of the process.

There is a legitimate argument that residents, and most specifically homeowners, have the greater interest in the future of most neighborhoods.  But the goal was to include as equals all those who make up a community.

It some parts of the city, the Catholic Church is the center neighborhood life.  In others it’s a nonprofit corporation where people go for job training, counseling, day care, and the like.  Those leaders help shape the quality of life in the neighborhoods they work in.

It’s wrong to assume that residents and the business community will be polar opposites on every issue.  I remember when the neighborhood council and chamber of commerce in Studio City joined together to deal with the panhandling problem on Ventura Boulevard.

And there is an incentive for developers to approach community organizations before taking the first formal step with their envisioned project.  Time is money, so if the developer feels that there can be a high-minded conversation with the neighborhood council on the front end, and an agreement can be reached, it will save the developer lots of time and money fighting the challenges that often follow.

But in order for that to happen, the councils need to develop themselves into forces that can affect decision-making at City Hall.  Some have done that, and others have their meetings, vote, and go home.

Neighborhood councils live in a political world.  To be blunt, in order to get the attention of the elected officials they need to be able to hurt or help the politicians.  As a citywide system they have the numbers to wield incredible political power, but no leader has yet stepped forward to lead the organizing effort.

It really isn’t the City Charter that needs to be changed.  It was purposely written to be vague so that the details could come from future stakeholders, and later by the neighborhood councils themselves.

The last thing anyone should ever wish for is to have pointy-headed bureaucrats, politicians, or small cabals of anybody dictating the best way for neighborhood councils to function.  That’s not neighborhood empowerment.

Earlier I put together a list of 111 actions that neighborhood councils could take to fundamentally improve their own system and city government.  None of them involve the complicated process of amending the City Charter.  The solution to improving the system lies more in teaching the system’s members how to force change.

Also in last Tuesday’s CityWatch, my column proposed an ordinance amendment that would better allow the public to know what politicians and city staff do when they take business trips.

I mentioned the 1993 efforts of Councilman Zev Yaroslavsky to temporarily freeze all foreign trips following reports of a two-week trip that Mayor Villaraigosa and 20 or so other city officials would be taking to several European destinations.

My bad!  Of course, Villaraigosa wasn’t mayor at that time.  It was Richard Riordan.  I had it confused with a controversial 2008 trip by Villaraigosa to Israel with airport, harbor, DWP, business, and religious leaders to discuss police and fire response tactics, water conservation, recycling, and to sign a "sister river agreement" between the LA River and Tel Aviv's Yarkon River.

(Greg Nelson is a former general manager of the Department of Neighborhood Empowerment, was instrumental in the creation of the LA Neighborhood Council System, served as chief of staff for former LA City Councilman Joel Wachs …  and occasionally writes for CityWatch. He can be reached at [email protected])