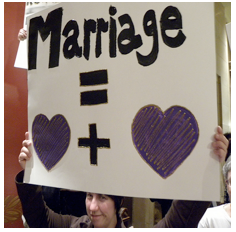 GAY RIGHTS - Back in at the end of George W. Bush's first term, Karl Rove looked at the map, and was worried.

He couldn't really run the president as a compassionate conservative like he did in 2000. That ship had sailed by then, so how could he turn out unreliable voters that would reliably vote for W? Why, go after the gays, of course.

It was as cynical of a ploy as is seen in politics, something straight out of the Southern strategy playbook. So, Rove got Republicans across the country to put gay marriage bans on the ballot to pull out social conservative voters that may not have turned out for W. And, he was once again able to squeak by with a win in 2004. It was a wedge issue that he used to bash over Kerry's head. And it worked.

The issue had lost some of its strength by 2008, and the few measures on the ballot, including our own Prop 8 that year didn't work the same magic for the GOP. While Prop 8 drew considerable attention, voters were more focused on the rapidly tanking economy. But the backlash from Prop 8, the ensuing legal battles, and the voter shifts in the last four years have since combined to make a toxic brew for the "Grand Old Party."

By now, the polls are showing considerable support for marriage equality. In fact, the trend is undeniable and quite stark. Over the past eight years, support for the freedom to marry has grown by 21 points. Rarely do opinions change so quickly on any issue, let alone a civil rights issue like this one. In California, the most recent Field poll, from about a year ago, shows 59% support, against only 34% opposed. These are not the kind of numbers you want to spit into the wind of.

And this brings us to Meg Whitman. In 2010, she said she supported Prop 8 and would work to defend it during the primary campaign. She ducked the issue as much as possible after she defeated Poizner in the primary, but it was still on the record. Given the final tally, it likely wasn't a deciding factor, but it also didn't really help her cause.  And now that she's back in the tech world, she's free to end her pander to the extreme base of her party. In a post on LinkedIn, Whitman addressed the flip-flop.

I have come to embrace same-sex marriage after a period of careful review and reflection. As a candidate for governor three years ago, I supported Proposition 8. At the time, I believed the people of California had weighed in on this question and that overturning the will of the people was the wrong approach. The facts and arguments presented during the legal process since then have had a profound impact on my thinking.

In reviewing the amicus brief before deciding to put my signature on it, one passage struck an immediate chord with me. In explaining his own support for same-sex marriage, British Prime Minister David Cameron once said, "Society is stronger when we make vows to each other and support each other. So I don't support gay marriage despite being a conservative. I support gay marriage because I am a conservative."

David Cameron also took heat from his own party when he pushed the marriage equality bill through Parliament. In fact, he lost a substantial chunk of his own MPs on the vote, and was only able to pass the bill with LibDem and Labour support. Yet that really only illustrates the underlying fact of the conservative loss on this issue. Despite the former first lady's rejection of an ad campaign featuring her support for marriage equality, the writing is on the wall. Leaders like Whitman, Jon Huntsman, and Dick Cheney have already arrived at the basic understanding of where the country is moving on this issue.

Perhaps this will make an impact on the Supreme Court's reasoning, perhaps not. But the pressure to not be the court that got a major civil rights case wrong must be very real for the Court. With electoral and legislative victories in 2012 and into this year, surely they can see the writing on the wall as well.

The Oral argument in late March may give us a greater indicator as to just how important it is to them.

(Brian Leubitz holds a law degree from the University of Texas and a Master of Public Policy (M.P.P) from the Goldman School at The University of California, Berkeley. He is the publisher and editor of Calitics.com where this piece was first posted.) –cw