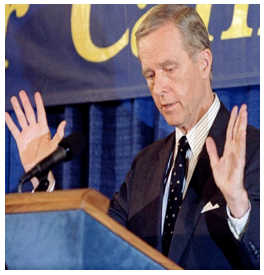 CALIFORNIA POLITICS - In 1994, Pete Wilson was looking at an election that was something of a risky proposition.

The economy, like most of the country, was scuttling, and his favorable numbers weren't doing so well.  As the race for the Democratic nomination shaped up with Kathleen Brown (sister of the current governor) easing to victory over (now Congressman) John Garamendi and Tom Hayden, the dynamic was not looking to be an easy win for Wilson.

Yet in November, Wilson had claimed a 15 point victory over Brown. What happened in those years?

Before Karl Rove rose to national prominence, and this became a term, it was Rovian politics at its best. Wilson knew he needed something to both turn out his base as well as secure some undecided voters, whatever the cost.

The cost turns out to be the future viability of the California Republican party by going all out for Proposition 187, the egregiously (and unconstitutionally) anti-immigrant measure  that would have blocked the state from providing most services to immigrants.

It worked in 1994, with the issue serving as a wedge that motivated the majority white voting bloc to lean heavily towards Wilson. Yet, just as surely as it worked in 1994, the fallout has been devastating to the CRP. Every few years, some reporter writes about the legacy of Prop 187.

As Congress begins debating an overhaul of the immigration system, many in California sense that the country is just now beginning to go through the same evolution the state experienced over the last two decades.

For a generation of Republicans, Gov. Pete Wilson's barrages on the impact of immigration in the 1990s spoke to their uneasiness with the way the state was changing. Now many California Republicans point to that as the beginning of their downfall.

"The fact that the Republican Party got identified with anti-immigration has made things very difficult for them," said Mark Baldassare, the president of the Public Policy Institute of California, which closely monitors shifts in the state. "It is what is going on nationally now, but California started much earlier."(NYT)

The Republicans are now attempting to dig themselves out of that mess, but it takes more than a few platitudes to make up for a generation of words and deeds. The demographics make it nearly impossible to win statewide election without a considerable portion of the Latino vote.

And, interestingly enough, this is where Texas looks like it may be following in California's footsteps. The two states now have nearly half of the nation's Latino population, and both are rapidly growing.

California has always been on the leading edge, especially in politics. As California goes, so goes the nation.

Jim Brulte and his CRP compatriots have a lot of colleagues in the same boat across the nation. Changing the dialogue is a gargantuan task, and one that may terrify much of the activist base.

(Brian Leubitz holds a law degree from the University of Texas and a Master of Public Policy (M.P.P) from the Goldman School at The University of California, Berkeley. He is the publisher and editor of Calitics.com where this piece was first posted.) –cw