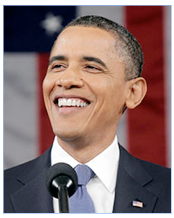 ANALYSIS - President Obama’s fifth State of the Union address was so wide ranging and inclusive, it’s almost difficult to recall the most ambitious proposals.

But the president was not merely throwing spaghetti at the wall, so to speak. He repeated phrases such as “we can get this done,” and “that’s something we should be able to do” throughout the night. The president’s proposal on cybersecurity was “something we should be able to get done on a bipartisan basis” and on immigration reform, he said, “We know what needs to be done.”

Again and again the message was clear: There is a backlog of obvious solutions to our nation’s many problems, and it’s time to get off your elected asses and vote. The most emotional moment of the hour-long speech came when the president implored Congress to address gun violence, noting that “in the two months since Newtown, more than a thousand birthdays, graduations and anniversaries have been stolen from our lives by a bullet from a gun.”

The president got the most pressing and boring business out of the way early—the budget logjam that threatens to dump the nation back into recession and has dogged Obama since his first term.

Again, he challenged Congress to drop the politics and govern: “The greatest nation on Earth cannot keep conducting its business by drifting from one manufactured crisis to the next. We can’t do it. Let’s agree right here, right now to keep the people’s government open and pay our bills on time and always uphold the full faith and credit of the United States of America.” As with many of the president’s appeals, House Speaker John Boehner remained firmly planted in his chair, so don’t hold your breath.

Among his many, many proposals, three stood out. The president pleaded with Congress to listen to the overwhelming judgment of science and act on climate change, but he also threatened to take unilateral action: “If Congress won’t act soon to protect future generations, I will. I will direct my Cabinet to come up with executive actions we can take now and in the future to reduce pollution, prepare our communities for the consequences of climate change and speed the transition to more sustainable sources of energy.”

The president also promised to work with states “to make high-quality preschool available to every single child in America.”

And, building on his overall theme that a strong middle class has always been the foundation of a strong America, Obama offered simultaneous proposals to raise the federal minimum wage to $9 an hour and tie the minimum wage to the cost of living, “so that it finally becomes a wage you can live on.” “[L]et’s declare that in the wealthiest nation on Earth, no one who works full time should have to live in poverty,” he said.

On foreign policy, we saw the usual balanced Obama. He coupled tough talk regarding nuclear proliferation in North Korea and Iran with a promise to work with Russia to diminish existing nuclear stockpiles.

Obama said there would be more troops coming home from Afghanistan and pledged, “by the end of next year, our war in Afghanistan will be over.” But he also said the United States would remain a military power in that country with a mission to support Afghan forces and hunt for terrorists. In other words, the war will be over, but we’ll keep fighting just the same.

The president addressed the drone controversy, folding it into the torture controversy rekindled by the film “Zero Dark Thirty.” He seemed to concede that he ought to be doing things less like his predecessor. “Throughout, we have kept Congress fully informed of our efforts,” Obama said.

However: “I recognize that in our democracy, no one should just take my word that we’re doing things the right way. So, in the months ahead, I will continue to engage with Congress to ensure not only that our targeting, detention and prosecution of terrorists remains consistent with our laws and system of checks and balances, but that our efforts are even more transparent to the American people and to the world.”

And that’s just some of the speech. There was a commitment to foster the first AIDS free generation in decades, promises to build centers of manufacturing excellence and launch something called a “fix it first” program. The president wants to reform entitlements, pass the Violence Against Women Act, cut tax loopholes, refinance mortgages and attract “private capital to upgrade what our businesses need most: modern ports to move our goods; modern pipelines to withstand a storm; modern schools worthy of our children.”

Throughout, he framed his ideas as obvious, agreeable and necessary. The sheer abundance of them only underscored the feeling that the members of this and the last Congress are a bunch of layabouts who simply need to get on board the America-moving-forward train. In other words, although he spent the better part of an hour urging Congress to rise above partisan politics, the president officially kicked off the midterm campaign Tuesday night.

Read the full text of the speech here.

(Peter Z. Scheer writes at truthdig.com where this article was first posted. Check out TruthDig.com for other writers and thinkers, Robert Scheer, Chris Hedges, Amy Goodman, Bill Boyarsky among them.)