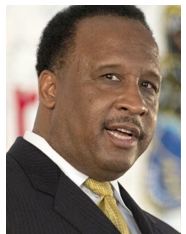 seems to have the best of luck these days. Every time a significant city council motion, initiative or ordinance is to occur at a city council meeting during which large crowds of Inglewood residents are expected to appear, an emergency occurs at city hall that disrupts the hearing.

The pattern began shortly after Butts became mayor in January 2010. The then-current city manager, soon-to-be-convicted felon Timothy Wanamaker, was set to explain why he was resigning. A bomb threat was called in and the building was evacuated. Wanamaker was able to evade further scrutiny, but left behind assistant, Mawusi K. Watson—whom he brought to Inglewood from Buffalo, NY and who now receives a remarkable $110,000.00 salary.

Wanamaker was recently convicted and sentenced for financial shenanigans as the city manager of Buffalo, NY, immediately prior to his position at Inglewood City Hall.

After its annual month of being adjourned, Inglewood city council meetings were resumed on Tuesday, January 15.

On Sunday, January 13, a citizen's flyer prompting a huge turnout to protest Mayor Butts’ initiative to hold future city council meetings on Tuesday afternoons at 1 p.m. was distributed throughout Inglewood.

On Tuesday, January 15, an “emergency” occurred at city hall—just in time to attempt disrupting a significant, First Amendment-guaranteed gathering of citizens to speak with the mayor about decisions that he, the city clerk and the mayor-appointed city manager, Artie Fields, have put forth on the city agenda.

The cause of the so-called emergency was a hand-delivered envelope that evaded scrutiny by the messenger or receiver. At approximately 11:30 p.m. an emergency call was made. The Inglewood Police Department, the LA County Sheriff’s Department, the FBI, and many other emergency agencies were called out to investigate.

An evacuation was eventually declared and 90 minutes later, during lunch hour, the building was fully evacuated.  Within a half an hour the entire building was declared safe and "city employees were allowed to enter at 1:20 p.m."

After a number of news media personnel attempted to inquire of the event, Inglewood Police Chief Mark Fronterotta put out a brief statement. It is seen below in its entirety.

Despite the potential delay, the first city council meeting of 2013—the first formally held since December 18—went off without any hiccups. It also went off without an explanation for the approximately $200,000 of wasted federal, City of Los Angeles and LA County funds expended for the day's false alarm.

Neither the mayor nor anyone else at Inglewood city hall offered a statement in the wake of what IPD Chief Fronterotta called an "odor was causing eye irritation" as well as an evacuation that required a 90 minutes to be fulfilled but only 30 minutes to be investigated and declared safe.

At approximately 11:30 a.m. today (1/15/13), the Police Department received a call from the Finance Department on the first floor of City Hall.  Finance had received a suspicious envelope that was damaged and emitting the odor of ammonia or an unknown solvent.  The odor was causing eye irritation.

IPD initiated a radio call and dispatched personnel to investigate.  When they arrived, IPD personnel discovered that Finance employees were experiencing mild symptoms.  LA County Fire Department was called to the scene.  A unified command post was established on the east side of the City Hall Complex near Queen and LaBrea.  Finance personnel and the City Clerk’s office were initially  evacuated, but the evacuation was ultimately extended to the entire City Hall building as a safety precaution.

Employees were directed by IPD and LA County Fire personnel to exit the west doors on the second floor and rally near the Library Lecture Hall.  The evacuation was managed smoothly and all personnel were out of the building by 12:50 p.m.

Los Angeles County Hazardous Materials teams responded from the fire department, sheriff’s department, and public health as is the usual protocol.  After extensive air sampling, the envelope was tested and the contents proved to be inert and non-toxic.   IPD is preparing the necessary follow-up reports, as is the County Department of Public Health.  The scene was declared safe, and City employees were allowed to re-enter City Hall at 1:20 p.m."