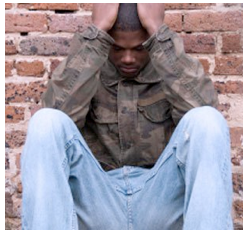 URBAN PERSPECTIVE - Black history month is a time to reflect on the achievements and accomplishments of African Americans past and present. Also, it is an opportunity to focus on poverty and homelessness, an issue disproportionately affecting Black America.

It is rare to find studies that document the racial differences of homelessness and is a reflection of urban communities across the country. One recently released by the California Homeless Youth Project and co-authored by Collette Auerswald, MD and Ginney Puddlefoot contrasts African American and Caucasian homeless youth in San Francisco; and find that African American youth have different homeless experiences, perceptions, trajectories and survival strategies than Caucasians.

For example, the study highlights that African American homeless male youth are more likely to sell drugs or sexually exploit girlfriends and other females as their primary and secondary source of income. African American homeless youth are more likely not to identify as homeless and as unstably housed, and state their housing instability as a result of poverty, substance abuse, or social service failure. Based on their definition and interpretation homelessness, they tend to be an invisible, underserved, and undercounted population that seeks services and resources differently.

On the other hand, Caucasian youth are more like to identify as homeless, employ various means to earn an income, and access resources at a higher frequency.

Arguably, the study is correct on racial differences, including street drug use patterns. However, it does not capture the changing pattern of drug use similar to what South LA is undergoing. While marijuana and alcohol are typically widespread among African American homeless youth, Molly, a powder or crystal form of MDMA, is the new growing “crack” epidemic, especially among high risk current and former foster care youth.

Despite the characteristics and course of African American homeless youth, different interventions and approaches are necessary for the 21st century. The lack thereof will fail to effectively attract and engage them in services that lead to personal and housing stability.

African Americans have excessively higher ratios of homelessness than other ethnic groups although they make up 12% of the general population. As a subpopulation, their factors for homelessness go unnoticed due to poor comprehensive race-based strategies to confront continued marginalization, education disparities, family stability, and food security.

Solving homelessness is not an easy undertaking. However, African American youth can be routed away from poverty and homelessness if policy and decision makers have the guts to move from homogeny to cultural relevancy.

(Janet Denise Kelly is a CityWatch featured contributor. She offers more than a decade of accomplishments in the housing and nonprofit sector. Janet brings valuable insight in the areas of community and economic development. Additionally, she brings knowledge regarding the leadership and management challenges faced by large and small nonprofits that are struggling or growing organizations. She blogs at jdkellyenterprises.org and can be reached at: janetdkelly@yahoo.com) –cw