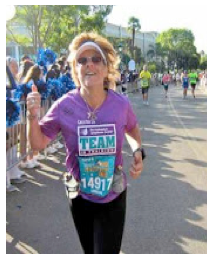 MY TURN - First her aunt went, dying in 1996 of an aggressive leukemia within two years of the diagnosis at age 51. Her niece, Lorraine Shea, didn't know much about cancer then and felt helpless.

Then Lorraine's mom went in 2010, dying within four months from a different form of the savage disease at age 74. Now Lorraine knows more about blood cancers than she ever wanted to know and can tick off stats such as "every ten minutes someone dies of blood  cancer."

After the loss of her mother, Shea, 49, found herself traveling across the Vincent Thomas Bridge from her longshoring job, feeling routinely angry, devastated and robbed. Every day, at 5 p.m. she had called her mom, Elizabeth Carter, while driving over the bridge -- a pleasure that she no longer had.

"I hate cancer more than anything else," Shea said, sometimes tears filling her eyes. "I want to help other people beat cancer. This is my passion. It gives me purpose."

And that is why Lorraine, 49, a Harbor City resident, has launched an aggressive campaign to raise $150,000 for blood cancer research  and is planning a giant jazz concert at the Warner Grand in San Pedro on February 9. It's an unprecedented goal for a single volunteer to raise that much for the Leukemia and Lymphoma Society. Lorraine also picked six faces of cancer to honor-- all of different ages -- to show the public how the disease can strike at anyone at any time and leaves a train wreck behind for families overwhelmed by their losses.

Her purpose was the whole point of ...

Despite that she's been nominated as "Woman of Year," for the society, it's not the title she's after; it's the money needed to investigate ways to prevent the prolific serial killer.

In her more recent events, Lorraine already raised $20,000 toward her goal with the help of friends she met in Team and Training, one arm of the society's fundraising efforts. The society provides coaches to train volunteers how to run scheduled marathons as a way to produce research funding. That's where Lorraine's dedication to the agency began.

It started out small at first. Her first goal was to raise $5,000 by completing the Disneyland half-marathon in 2011.  It was a challenge. But she did it.

"I had never run a marathon or anything like that," Lorraine said, adding when she crossed the finish line "it was an amazing feeling. Every emotion came rushing in all at once. I felt sad because it was all over but happy because it was over. I don't think I'll ever have that feeling again."

Lorraine, however, wasn't satisfied with her first fundraiser; the goal amount was too small and now she knew more and more people afflicted with the often deadly illness.

Anyone who wants to talk to her about cancer can easily gain her ear and her heart. She's more than interested now and says she has leaned on a team of about 15 women -- who became friends with her when running the marathons  --  stacking up their efforts to support her mission called Unite to Fight Blood Cancers. She calls "my girls" "Team Forzo" Italian for strength.

After she completed that half marathon, she became a volunteer mentor working with other runners to compete in more Team in Training marathons. Lorraine now loves to run.  Her cheer leading efforts caught the eye of Whitney Vanpelt, a campaign manager for the society who nominated Lorraine for the society's Woman of the Year. Whitney has no doubts that Lorraine will actually raise that much money.

"She was on my (running) team and she got everyone so motivated," Whitney said. "She gets to know everyone on the team. She's fun. She's hilarious. She's organized. She doesn't give up. She just goes and goes and goes. She's been working really hard to make a difference.

" She's like a thoroughbred. I think she can do it."

The upcoming concert will honor six people who have died from blood cancer.

"It's people who have touched my  heart either directly or indirectly," Lorraine explained. "It's a diverse group. I think about how we are going to end our time here. It's just mind boggling. The fact that I have a purpose to help people I've never met makes me feel good."

Those whose loved ones will be noted at the concert said they appreciate and respect Lorraine's efforts.

Jenny Bonney, who lost her little guy at the age of three, two days before his fourth birthday,  described an enthusiastic boy who loved Captain America, but began having terrible stomach aches. He was routinely misdiagnosed with anything from rheumatoid arthritis to meningitis before the family learned he had leukemia and the doctors told them "there's no next step" to save him.

Before he died, Larry told his mother he felt better and that "Jesus kissed my feet last night."

Jenny said it's a beautiful gesture that Larry is included in the concert who also was "a mascot" for one of Lorraine's bowling events. "Sometimes, we're just still in shock."

Devon Hamilton's grandmother, Mary Martinez, lauded Shea's decision saying losing Devon at the age of nine broke the hearts of everyone that knew her.

"This concert humanizes our loved ones once again," the grandmother said. "Family members will be there supporting the cause to find a cure. For many of us, it's already too late. But this is to someday find the cure and save the lives of our future doctors, dancers, mothers, friends."

No family touched with blood cancer is unscathed.

Lorraine describes tortuous days as the end neared for her mother, diagnosed with acute myeloid leukemia, a rare form of the cancer. She blesses the fact that before illness she took her mother to New York, Las Vegas, San Francisco, Orlando, Mexico and Italy. In Vegas, her mother always happily won at Blazing Sevens slot machines, she said.

But on their return trip from New York, Lorraine and her brother, Alfred Davino,  noticed their mother had slowed down and deep colored bruises, some the size of grapefruits, began appearing on her body. She was no longer interested in food. Then she had dental work done and the dentist couldn't staunch the blood flow.

Doctors at Torrance Memorial -- who knew Elizabeth well as a volunteer - found her white blood count "twenty times" greater than it should be. Before the diagnosis, Elizabeth had told her kids that she dreaded wheeling patients to chemotherapy ward and that she never wanted to be rolled through that door. Now, she was facing the of fight of her life there, one that would go on for about four months. Chemotherapy. Remission. Chemotherapy.

Instead of thinking about herself when she was hospitalized, Elizabeth puttered to get the doctors and staff their meals, snacks, make them coffee or run other helpful errands, Lorraine said.

On Thanksgiving 2010, her mother relapsed and died on Dec. 1. Lorraine said she felt empty, cold and wondered if she had been a good enough daughter. "It was hell for me," she said.

Many oncologists and nurses showed up for Elizabeth's funeral. "They loved her," Lorraine said.

But all Lorraine had left afterward was a gaping emotional hole -- one that her purpose has since begun to fill with light and happiness --  and money to defeat one of the world's biggest killers.

Now Lorraine can grin and say if her mother were here, Elizabeth would once again be calling her "an octopus" for all her involvement and good deeds she had shed on the world.

The Unite to Fight Blood Cancers Concert will be held at 5 p.m. February 9th

Showcasing such great acts as:  One World, Azure and One Ten South.

A silent auction will also be held.

General admission is $20 a ticket;

Tickets sold at the door will cost $25.

Tickets can be bought at experiencesp.com. [[hotlink]]

The Warner Grand is located at 478 6th Street, San Pedro.

(Diana Chapman is a CityWatch contributor and has been a writer/journalist for nearly thirty years. She has written for magazines, newspapers and the best-seller series, Chicken Soup for the Soul. You can reach her at:   hartchap@cox.net or her website: theunderdogforkids.blogspot.com) –cw