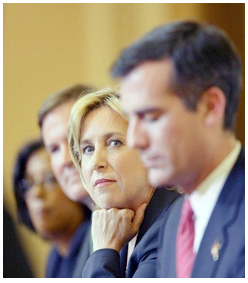 PERSPECTIVE - You would expect an executive to be able to explain the key numbers when presenting financial information.

How about the City Controller of Los Angeles?

I guess Wendy Greuel was never concerned with that aspect of management in her “private sector” experience.

Eric Garcetti was correct when he referred to Greuel as the “press release” controller. She can read what is on a sheet of paper – but explain it? Maybe it’s not in the City Controller job description.

That’s probably a good thing for Dennis Zine, too.

It was clear Greuel did not have a clue about a $50 million difference between what she claims as a major component of savings she has identified and what her department’s audit report indicates. She babbled senselessly trying to explain it, then gave up. The KTLA video is worth a thousand words.

She brought back memories of Miss Teen South Carolina’s performance in the 2007 Miss Teen USA Pageant.

All kidding aside, it is apparent Greuel has no command of the numbers – the big numbers, not petty cash.

How would you feel if the CFO or the CEO of a company in which you held stock could not explain a significant transaction to the public? How do you think the stock market would react?

It brings into question Greuel’s overall claim of $160 million in identified savings. Her only proof is a list on her campaign website. Dare we ask her to substantiate the other items? You can go to the audit scorecard on her controller website (the same scorecard she alludes to in the KTLA video), but do not expect to be enlightened.

And who prepared the campaign website list? A campaign aide or one of her employees in the controller’s office? If it was the latter, then Greuel has further explaining to do.

According to a story in the Los Angeles Times, a Greuel campaign spokesperson stated that the auditors “felt compelled to highlight the $57-million figure,” an estimate of future losses related to the street furniture audit that is the basis of about one-third of her claim.

Did the auditors highlight the amount for the campaign staff to see?

If so, wouldn’t that be an ethics violation? A review of Greuel’s own calendar has already raised suspicions about her use of City Hall staff in her campaign.

If Greuel was not conversant enough on the subject to provide even a superficial explanation of the issue, who explained it to the campaign staff? John Schalmann?

On the other end of the materiality scale, Greuel’s list includes $880,000 related to NC spending. At a meeting of the Los Angeles Neighborhood Council Coalition today, I asked the Department of Neighborhood Empowerment’s general manager Gracie Liu if she was familiar with Greuel’s claim. A good general manager would know if there were problems in her department amounting to almost a million dollars. Ms. Liu, unlike her predecessor, is competent and taking measures to improve internal controls at DONE.

She was unaware. Granted, she acknowledged that many neighborhood councils have not submitted reports and there are issues of missing documentation. That is a serious issue as it could lead to fraud, but most of it is likely due to lack of training of NC treasurers. The vast majority of the spending is probably legitimate. Controls are better today than a few years ago when a handful of NC board members misappropriated over $100,000. Greuel is counting all of it as waste, fraud and abuse before it can be proven.

Greuel is presenting the bluest of blue sky projections in an attempt to portray herself as the ultimate fiscal watchdog. But she is actually the fox guarding the hen house.

(Paul Hatfield is a CPA and serves as Treasurer for the Neighborhood Council Valley Village.  He blogs at Village to Village, contributes to CityWatch and can be reached at: [email protected]) –cw