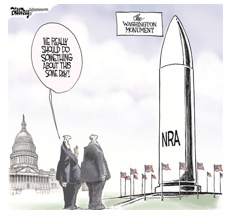 GUN POLITICS - For many Americans, not just those who live in Newtown or Aurora or Tucson, this was the big moment. Finally, the Senate Judiciary Committee would address the burning issue of gun violence in America.

What they got at Wednesday’s high-profile hearing was a well-articulated exchange, but make no mistake: little will change. Participants at the gun session were firing blanks.

Who could fail to be moved by Gabby Giffords’ passionate plea to Congress to take action? “We are not here as victims,” added her husband David Kelly, “we are here as Americans.” It wasn’t enough.

America’s gun lobby is so powerful that even a hearing on curbing gun violence contained barely a word about actually removing firearms from the public’s hands.

Committee Chairman Patrick Leahy of Vermont, a noted Senate liberal, was compelled in his opening statement to explain that he owns guns. The ranking member, Republican Chuck Grassley of Iowa, went out of his way to assure gun owners that their rights will not be restricted. Not a chance. The hearing was like watching a circular firing squad.

Sen. Chuck Schumer of New York, a noted gun opponent, tip-toed through the event, limiting his focus to background checks rather than actual gun restrictions.

Gayle Trotter, a women’s rights advocate, testified that the AR-15 assault weapon is the ideal gun for a mother to use when defending her home and children against violent intruders. Imagine that! Lindsey Graham, Republican of South Carolina, said he owns an AR-15 and insisted that in some cases the weapon “makes perfect sense.”

As a result of such thinking, this nation will not soon solve — nor meaningfully address — its rampant gun problem.

Sen. Dick Durbin, Democrat of Illinois, got NRA chief Wayne LaPierre to concede that one reason he favors gun ownership is for citizens to protect themselves from their own government. James Johnson, the police chief in Baltimore County, said LaPierre’s view was “creepy.” But it’s part of a spreading view among misguided Americans that government, not guns, is what places them at risk.

That’s how deep the division goes.

While it’s perfectly reasonable to seek ways to keep guns out of the hands of the mentally ill, Sen. Al Franken of Minnesota expressed legitimate concern that proposed legislation might result in “stigmatizing” the mentally ill. Even his GOP colleague, Utah’s Orrin Hatch, noted that the rights of the mentally ill must be protected.

Sen. Dianne Feinstein of California, perhaps the Senate’s staunchest believer in actual anti-gun legislation, was forced to concede, “This is such a difficult debate because people on both sides have such fixed positions.”

Indeed. And nothing — not Newtown and not seeing former Congresswoman Giffords’ struggle just to utter a sentence as a result of her gun-induced wounds — will change that. Half the nation believes that the solution to gun violence is limiting guns; the other half believes the answer is to rush out and buy more guns.

Congress hasn’t been particularly successful lately in accomplishing things, but it remains skilled at holding hearings that give the superficial impression that change is at hand. When it comes to guns, the nation is at a standoff, and will remain there for some time.

Wayne LaPierre, of all people, said he has testified on Capitol Hill numerous times and “nothing changes.” He neglected to point out that he and the NRA are largely responsible for keeping it that way.

(Peter Funt is a writer and speaker reachable at www.CandidCamera.com. This column was posted first at Cagle.com)