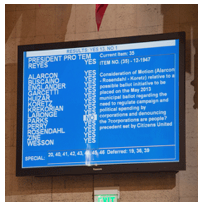 The ballot initiative will ask the voters of Los Angeles to weigh in on overturning Citizens United and endorsing a constitutional amendment that would eliminate corporate personhood and limit corporate spending in political campaigns.

Though the outcome of the vote will have no legal bearing on the infamous Supreme Court case, a victory at the ballot box in May would be a big push forward for the movement nationally–a project on the scale of amending the Constitution necessitates these grassroots actions at the local and state level before proceeding federally.

The ballot initiative effort was spearheaded by Anjuli Kronheim, an organizer for California Common Cause, itself a member of the Money Out/Voters In Coalition (MOVI). Kronheim pitched the idea to the Chief of Staff of Councilmember Richard Alarcón, Becca Doten.

In December of last year, Alarcón proposed the motion to draft the initiative. The councilman was joined in speeches of support at the Jan. 16 meeting by Councilmembers Eric Garcetti, José Huizar, and Bill Rosendahl. Alarcón said, “Corporations are not people, and should not be allowed to spend unlimited dollars to support candidates and influence political campaigns.

This ballot initiative gives the residents of Los Angeles the opportunity to send a loud message to the President, Congress and our Federal elected officials that the people of Los Angeles want constitutional reform and support overturning the egregious Citizens United decision.”

The Money Out/Voters In Coalition and field organizer Austin Price of California Public Interest Group (CALPIRG) played vital roles as well. An association of volunteer citizen activists and advocacy groups, MOVI is working on similar measures across the state and the country to build a grassroots movement for both legislative and constitutional solutions to corporate personhood and campaign finance. According to Kronheim, "Yesterday’s action demonstrates that the Los Angeles City Council understands the seriousness of this issue and is willing to let voters speak out about it directly. Voter instruction ballot measures have historically played a very significant role in bringing about constitutional amendments."

The project was a bit of a no-brainer for the council, as they had already voted to endorse the constitutional amendment in December of 2011 at the behest of Councilmember and current mayoral candidate Eric Garcetti.

In October of 2011, Garcetti had introduced a draft resolution to the City Council that would endorse overturning Citizens United, based on a Move to Amend presentation made by Mary Beth Fielder and others to the South Robertson Neighborhood Council. Move to Amend mobilized more than a hundred people to attend a public hearing on the draft the following month, to lobby for stronger language in the final resolution.

On December of 2011, Los Angeles became the first city in the United States to officially endorse a constitutional amendment that would state that only human beings are entitled to constitutional rights, and that money is not free speech. The mayoral ballot initiative gives Los Angeles another opportunity to be at the vanguard of this important and growing movement.

(Lauren Windsor is a member of the Money Out/Voters In Coalition. She actively works on the issues of overturning Citizens United and campaign finance reform. This piece was posted first at LAProgressive.com)