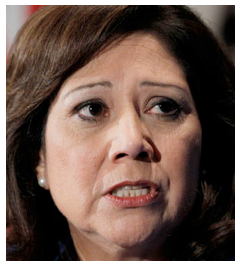 POLITICS - Few people were surprised when Hilda Solis announced earlier this month that she was leaving her post as Secretary of Labor. Hey, President Obama’s first term is done, there’s a lot of movement in the Cabinet and it’s not like the Labor Departments is DC’s most happening place.

But there was probably plenty of head-scratching when the former congresswoman told anyone who would listen that her next stop was likely to be the Los Angeles County Board of Supervisors.

Why, they likely asked, would anyone leave a Cabinet post in Washington, DC, to become a county supervisor?

The news wasn’t a shock in California, though, since county boards have become a favorite stopping place for out-of-work Golden State politicians.

In Los Angeles, the board already includes three former state legislators – Mark Ridley-Thomas, Gloria Molina and Mike Antonovich (although he left Sacramento 32 years ago). And Sheila Kuehl, a 14-year legislative veteran who was termed out of her state Senate seat in 2008, has announced she’ll be running for the board next year.

And why not? In California’s urban counties, being on the board is a full-time political job, with a healthy salary, plenty of perks, loads of visibility and generous term limits, where they exist at all. And while supervisors’ jobs are technically non-partisan, the key word is “technically.”

In LA, the job is sweeter than most. Each of the five supervisors represents a district of about 2.1 million residents, which is larger than 15 states and all but eight of the nation’s cities. They get paid $178,000 a year with $3.4 million for staff, offices and “discretionary” projects.

And since supervisors have historically been loathe to tinker in a colleague’s bailiwick, each member pretty much gets to run his or her own show in one of the nation’s largest media markets.

It’s not just in Los Angeles, either. Veteran legislators like Jim Beall in Santa Clara, Bruce McPherson in Santa Cruz, Todd Spitzer and Pat Bates in Orange and Wilma Chan in Alameda all found their way to county boards after their days in Sacramento.

Chan, actually, found her way back. She spent two terms on the Alameda County Board, six years in the Assembly and then, after losing a state Senate primary, won her old board seat back in 2010.

You can blame this trend on term limits and the law of unintended consequences. When California voters passed Prop. 140 in 1990, they thought they were clearing the way for a new group of politicians to ultimately replace the ones who had been in Sacramento for years.

They were half right. Term limits did clear the way, but only in the way that musical chairs clear a room. When the music stops, almost everyone is still going to find a seat. Somewhere.

(John Wildermuth is a longtime writer on California politics and blogs at FoxandHoundsDaily.com where this piece was first posted.)