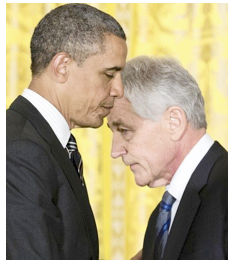 The issue is President Obama. The GOP has used the same shopworn template to hammer Obama so often it can be drawn up while asleep. It goes like this. Pick an Obama nominee, be it to the cabinet, Supreme Court, or federal judiciary. Then either dig up the barest scrap of mud or dirt that can be found on them or failing that dither, delay, and obstruct for months their confirmation.

The former ploy was used to try and scuttle the confirmation of Attorney General Eric Holder. It was repeated again with Secretary of State possible nominee UN Ambassador, Susan Rice. This time the ploy worked. She withdrew her nomination. The latter ploy has been used with Obama’s judicial nominations. Few have been approved. So few, that Obama has the dubious distinction of having fewer judicial nominees confirmed than any other president in the past quarter century.

Now we come to Hagel. Arch Hagel nemesis Senator John McCain was on record at one time saying that Hagel would be a fine defense secretary. But what a difference a presidential election and a Democratic president winning it again can make. McCain and company now lead the charge against Hagel. Again, the anti-Hagel hit can only be explained by the fact that he’s Obama not Bush’s nominee.

Hagel is a combat veteran, would bring a much needed fresh and flexible view to foreign policy issues, and is tough minded. He has repeatedly apologized for his intemperate quip in 2006 about the “Jewish Lobby” having too much its way on Middle East policy. He has made it clear he’s a staunch supporter of Israel. If he wasn’t he would not been picked. His stated reluctance to nuke Iran is a sane and rational position that he explained as folly especially since the US has no plans to send ground troops in there.

So it’s back to Obama. Hagel is a pawn in the GOP’s high stakes game to harass, obstruct, and sully Obama’s presidency. It tried it with the fiscal cliff battle. It will do it again with the coming war over the debt ceiling, spending cuts, and immigration reform. But it’s the president’s nominees that the GOP figures it can score points against him on the cheap.

The GOP will bluff and bluster at Hagel during the confirmation hearings. Eventually, he will be confirmed in committee and by the full Senate. But it won’t be the last time Obama will hear it from the GOP about a nominee. Why? Because it’s not about Hagel, it’s about Obama.