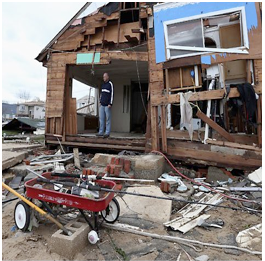 PLANET IN CRISIS - Much of the nation is still suffering the worst drought in half a century, which began in 2012. Consumers are just now beginning to feel its effects in the form of higher food prices. Texas suffered another catastrophic drought in 2011. Full recovery from Superstorm Sandy will take years for the hardest-hit communities.

So President Barack Obama, whether you like it or not, the issue that will define your legacy will be the climate crisis and the extreme weather it seems to be making the new normal. Decades from now, historians will ask: Were you the transformational leader who helped the United States lead the world’s reduction of greenhouse gas emissions, or did you let eight more years pass while doing nothing?

Tackling the climate crisis will be a battle. Powerful and entrenched interests don’t want the country to stop mining, drilling, and burning fossil fuels. Corporations don’t want to change their practices, even if it means their CEOs’ grandchildren will enjoy better lives.

These powerful industries will try to fool the American people into believing that any action we take in greenhouse gas emissions will stifle economic growth and curtail our freedom and liberty. But the recent weather extremes show us the truth.

Our freedom, liberty, economy, and safety are all in much greater jeopardy from hurricanes, droughts, floods, and other natural disasters than they are from well-designed, sensible measures to prevent a climate crisis.

Ask a New Jersey resident which is worse: Superstorm Sandy or retrofitting buildings with better insulation and solar panels? Ask a farmer if he’d prefer repeating this year’s crop-killing drought or adopting new conservation methods on his farm.

Our leaders are haggling over spending priorities and taxes because they believe the nation can’t afford to go over a “fiscal cliff.” We must ask ourselves whether we can afford the damage we stand to suffer from more frequent and more extreme natural disasters in the future. This is the cost of doing nothing about the climate.

Germany produces enough energy from solar panels to equal the power generated by 20 nuclear power plants operating at full capacity. Europe’s largest economy aims to reduce its greenhouse gas emissions by 40 percent below 1990 levels by 2020. But Germany is only responsible for less than three percent of global emissions. Even if that country were to cut its levels down to zero, it would never have much of an impact on the world as a whole.

The United States, on the other hand, produces almost 20 percent of the world’s emissions. We unleash one out of every five carbon atoms in the atmosphere. If Washington and our business leaders decide to do something about that, we could make an enormous difference in the fate of the entire planet.

The climate crisis isn’t just some hippie tree-hugger environmentalist problem. It’s a matter of food security too, because our climate impacts our ability to grow food. It’s an economic problem, because you better believe that frequent, catastrophic natural disasters will pummel the economy. And it’s a matter of national security. A planet full of climate refugees from poor nations could destabilize governments around the world.

So, Obama, you’ll never have to face another presidential election, but you do have to worry about what will be written about you in the history books. Why not devote this term to doing something truly epic?

Use every bit of power your office affords you. Don’t expect the Republicans to compromise, and don’t try to meet them in the middle. If there’s one issue to stake your entire second term on, it’s the climate.