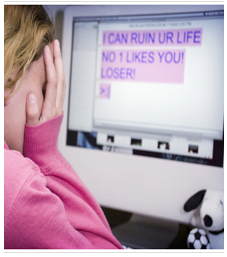 MY TURN - Images that blossomed on Facebook pages of "ratchet" girls in the Harbor Area in early December were not criminal and were considered child "erotica," rather than pornography, says a lead investigator who heads a regional task force that deals with internet crime against children.

However, Los Angeles Police Lt. Andrea Grossman reported it as cyberbullying to Facebook and the company removed those sites within one hour of her call.
No penal codes applied in this instance, Grossman explained.
"It's not a criminal act," said Grossman, who heads the regional ICAC, Internet Crimes Against Children, a multi-agency task force of local, state and federal law enforcement officers. "We looked at the site. It was child erotica. That is not illegal.
"It's not (child) pornography," which is a crime, she explained.
Grossman says the Facebook sites that appeared around Dec. 2 using students images, some of scantily clad girls from San Pedro and Banning High Schools, did appear to be "pure cyberbullying"; However, currently no laws exist to make it a crime or to give the agency teeth to force internet companies, such as My Space or Facebook, to pull such sites down.
Facebook, however, was fully cooperative, she said.
"We can't force them to take down the sites," Grossmann said. "It's up to Facebook. But once I contacted Facebook, they responded in one hour which is pretty good time."
Grossman's task force covers five counties: Los Angeles, Santa Barbara, Ventura, Orange and San Bernardino. Crimes involving children on the internet, Grossman said, should be reported immediately to the National Center for Missing and Exploited Children which acts like a clearing house for such crimes and alerts local authorities in charge. For instance, if an internet pornography complaint came in to the National Center involving a child in San Pedro, Grossman said, her task force would be notified to investigate immediately.
The task force also must report back to the center as to what happened with the case.
The local issue erupted when the internet group San Pedro California began complaining about the sites saying they had "offensive," demeaning, and abusive photographs of girls from the area along with derogatory comments.
Those commenting on the sites called some of the girls "hos" (whores) or claimed that some girls gave sex freely. While many in the California group reported their concerns to Facebook via the internet, the sites remained up until Los Angeles Councilman Joe Buscaino took a stance and called in Grossman's task force and other agencies to try and force their shut down.
Facebook removed San Pedro Rachets, Wilmington Rachets and San Pedro Hotties from their pages, agreeing with Grossman and many of its complaining users that cyberbullying had occurred which goes against Facebook policies. Rachets, according to the Urban Dictionary, are a "diva, mostly from urban cities and ghettos, that has reason to believe she is every man's eye candy. Unfortunately, she's wrong."
Buscaino, known for working closely with teens when he was an LAPD officer, said he considered the pages slanderous and abusive.
While no laws exist now regarding cyberbullying, Grossman said, there are other laws that might fit but didn't work in this case. Laws specifically against cyberbullying eventually might be implemented, she said, especially since the topic has riveted the nation after several youths committed suicide who became victims of internet attacks.
The Internet Crimes Against Children is a federally funded agency  that formed 61 national teams devoted to fight child exploitation via the internet and offers "reactive, proactive, and forensic investigations and criminal investigations," its site reports.
Since its formation in 1998, the task forces have dealt with 280,000 complaints of alleged sex abuse against children and led to 30,000 arrests, according to the national Office of Juvenile Justice and Delinquency Prevention.
The beauty of these agencies, Grossman added, is that internet crime is "everywhere," and it's not something that the Los Angeles police can deal with alone. Agencies had to join together to be effective, she said.
The program offers training to agencies that might be involved including schools, Grossman said. In this instance the schools, Banning High and San Pedro High, would be responsible to carry out further investigation of who the perpetrators were that put up the sites.
Internet users who believe they have concerns of child exploitation on the internet can report it too www.missingkids.com or call  1-800-843-5678.
(Diana Chapman is a CityWatch contributor and has been a writer/journalist for nearly thirty years. She has written for magazines, newspapers and the best-seller series, Chicken Soup for the Soul. You can reach her at:   hartchap@cox.net or her website: theunderdogforkids.blogspot.com) –cw
CityWatch
Vol 11 Issue 2
Pub: Jan 4, 2013