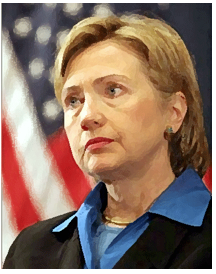 POLITICS 2013 AND BEYOND - It is time to resume discussion about the possibility of a political realignment that would make Democrats the leading national political party for a generation.
Analyzing the results of three out of the last four national elections, the sweeping demographic changes that will define future national elections, the fact that national Republicans are dominated by fear of primary challenges from the right (which moves them further from mainstream national opinion),

the positioning of the two parties in the debate surrounding the fiscal cliff, the fact that polls show Republicans will be widely blamed if current negotiations fail and the possibility that Secretary of State Hillary Rodham Clinton could seek the Democratic nomination in 2016, the possibility of an FDR-magnitude Democratic realignment comes clearly into view.
Secretary Clinton will have two years to enjoy her liberation from the demands of national office before she needs to decide whether she runs for president. The possibility of an FDR realignment exists regardless of Clinton’s decision but will be powerfully advanced if she runs.
My advice to the Clintons will be to consider not merely whether she should run but the kind of candidacy she could create, the kind of presidency she could lead, and the kind of legacy she could leave for the policies and people she cares about deeply.
As I have written before in this space, it is time to shatter the myth that America is a center-right nation, a myth propagated by the right and accepted by far too many in the media. Democrats have won three of the last four national elections: in 2006, 2008 and 2012.
President Obama made history being elected in 2008 and reelected in 2012 in an election that is reminiscent of FDR’s reelection in 1936. The Obama campaign invented new techniques of voter and small-donor mobilization as profound as JFK’s innovations of 1960 that brought politics into the television age.
America is not a center-right nation. America is a centrist nation that makes periodic moves to the center-right and center-left depending on circumstances. America is today in a center-left phase. This is why Democrats won three out of the last four national elections, why Bill and Hillary Clinton soar in favorability polling, why Barack Obama was elected in 2008 and reelected in 2012, why Senate Democrats expanded their majority again in 2012 and why the new ABC-Washington Post poll finds towering support for a Clinton candidacy in 2016.
Republicans face a political death trap of being subservient to rightist factions that attack and destroy moderation and centrism in primaries. Republicans frighten growing legions of voters. They drive away independents and drive up Democratic turnout.
Republicans escalate the fiscal-cliff debate by threatening to crash the economy unless they get their way defending tax cuts for the wealthiest and cutting Social Security and Medicare. This is the stuff that landslide losses are made of.
If Hillary Clinton is elected in 2016 the Obama-Clinton years would bring a triple-dose of historic change with two presidents shattering ceilings plus policies as transforming and powerful as the FDR-Truman years and the Kennedy-Johnson years with the political forces inspired and unleashed, and the policy changes implemented and institutionalized.
The FDR-magnitude expansive coalition that Hillary Clinton could inspire by tapping powerful demographic waves that define our politics and reaching across gender, age and racial lines is a mathematically perfect counterpoint to the shrinking-tent Republicanism that demonizes moderation and tolerance.
While it might appear counterintuitive, the prospect of the Obama-Clinton years will enhance and invigorate the political strength of President Obama throughout his second term, enhance and expand the achievements and historical legacy of the Obama presidency, cement the deserved historical reputation of President Bill Clinton as a first-tier president and bring a Hillary Clinton presidency with an FDR-magnitude realignment that will define the politics and policies of America for a generation.
(Brent J. Budowsky is a political opinion writer for LA Progressive where this piece was first posted.)
CityWatch
Vol 10 Issue 104
Pub: Dec 28, 2012