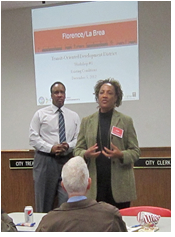 INSIDE INGLEWOOD - Are City of Inglewood executives allowing residents of Inglewood to believe that LA County Metro is responsible for recent Transit-Oriented Development meetings? One might easily infer exactly that from two December meetings held in Conference Room A at city hall in Inglewood.

The first meeting was held on Wednesday, December 5 and featured Inglewood Mayor James T. Butts, who spoke to the group. Also attending was former Inglewood Mayor Danny K. Tabor, District 4 council member Ralph L. Franklin and at least one person wearing an orange vest with reflective stripes bearing the Metro logo. Neither Tabor, nor Franklin, nor the person with a Metro vest spoke. The meeting was hosted in part by San Luis Obispo-based RRM Design Group and the key speaker appeared to be the firm's Principal Landscape Architect, Tony Keith.
The second meeting was on Saturday, December 15. According to the December 13 edition of the newsletter Inglewood Today, "councilmember (sic) Ralph Franklin announced the City (sic) is sponsoring a meeting Saturday, Dec. 15 to get community input about the future of downtown in regard (sic) to the future transit station near LaBrea and Florence." The implication was that Franklin would again be present. It was the second of two such meetings. One difference between the two meetings was that neither Butts, nor Franklin, nor Tabor was present at the second one.
Employed at both meetings were PowerPoint presentations prominently featuring the City of Inglewood seal and the Metro and rrmdesigngroup logos. The PowerPoint clearly mimicked the design style of Metro PowerPoint presentations.
The striking resemblance of Metro's signature design style was also found in a document titled "TAP-Report-Inglewood-Florence-La-Brea-Station-2011.pdf," a report which was published in part by the City of Inglewood. In the 24-page report, Linda Tatum is identified in photographs as well as formally acknowledged. Also of note is the term "TAP" in the title, which does not mean Metro's TAP (Transit Access Program) but "Technical Assistance Panel." The report was never mentioned during the TOD meetings.
At both meetings, the same three people spoke at length to the attendees about the importance of community input regarding the Metro station to be placed at La Brea and Florence. One was Keith. The other two were City of Inglewood executives, Linda F. Tatum and Mawusi K. Watson. Tatum is the Planning Manager for the City of Inglewood's Planning and Building Department, and Watson is the Executive Assistant to the City Manager of Inglewood. Keith, who introduced himself as the "Principal Landscape Architect of RRM Design Group,” later introduced the City of Inglewood executives as only "Linda" and "Mawusi.” None of the speakers were identified publicly as City of Inglewood employees.
At both meetings, Tatum failed to follow two fundamental rules of oratory: full disclosure (i.e., one's name and title, et al.) and credibility. Upon being called from her seat at a table nearest the entry door and at the rear of the audience, Tatum immediately launched into her monologue: "This workshop is a meeting that is coordinated and sponsored by the City of Inglewood in cooperation with the target team." As she spoke, she swept her arms as if to indicate the people and PowerPoint presentation screen behind her. She went on to speak at length, mentioning Metro a number of times.
It was only after a lengthy private discussion held near the meeting's end and out of earshot of the audience that this reporter learned that "Linda" is the Planning Manager for the City of Inglewood, and that according to her, Metro had "absolutely nothing to do with the TOD meetings." Later calls to Tatum to inquire if the meetings' findings—including the extensive ideas proffered by those who spent the better part of two days to contribute—would be turned over to Metro were not returned.
On Monday, December 17, when asked if Metro had anything to do with the TOD meetings, Metro Media Relations spokesperson José Ubaldo confirmed Tatum's statement. "Metro was not invited to the TOD meetings. It's too early for Metro to do TOD developments. [The City of Inglewood] could have just cut and pasted the logo from the Metro website."
There appears to have been a third meeting, one that was unannounced and, surprisingly, unknown to Metro.
According to a city employee who requested anonymity but who was present at the December 15 meeting, Franklin had been present at a meeting with Metro representatives on Friday, December 14, in the very same room that the Saturday meeting was held.
According to Ubaldo, "Franklin had been at an event hosted by Metro's Community Relations (CR) department. It was not a meeting." Ubaldo would not name the person in Metro's CR department who provided the information.
Speaking to Metro CR Interim Deputy Executive Officer Susan Gilmore revealed little. Upon being asked to confirm if Franklin had been present at any such "event" with Metro personnel at Inglewood City Hall on Friday, December 14, Gilmore refused to answer. Instead she asked, "Who told you this?" When informed that it was Ubaldo, Gilmore promised to call back. The return call never came.
The circular logic of Metro's Public Relations staff prompted a deep research that unearthed a Metro South Bay Cities Service Council Agenda document that was clearly titled as a "Regular Meeting." The date and time were also clearly stated at the top right: Friday, December 14, 2012 / 9:30 - 11:30 AM." The cover page also noted that the Chair of Metro's South Bay Cities Service Council is Inglewood District 4 council member Ralph L. Franklin. The meeting was held in Conference Room A of Inglewood City Hall.
Calls to Metro regarding the document and Metro's alleged ignorance of it, the respective proceedings and the persons who attended were not returned.
At the end of the December 15 meeting, Keith announced that there is to be one more TOD meeting in mid-January. It is the belief of this reporter that such a meeting may not occur.
(Randall Fleming is a veteran journalist and magazine publisher. He has worked at and for the New York Post, the Brooklyn Spectator and the Los Feliz Ledger. He is currently editor-in-chief at the Morningside Park Chronicle, a monthly newspaper based in Inglewood, CA and on-line at www.MorningsideParkChronicle.com)
-cw
CityWatch
Vol 10 Issue 102
Pub: Dec 21, 2012