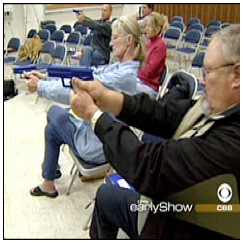 AND, THE RIGHT TO LIFE - Last night at dinner, my husband said, "There's no solution." We were talking, of course, about gun control, and it is true that the flood of guns and ammo into our neighborhoods and our nation is daunting. There is no solution.

But the first thing I thought of was my mother and me, driving along back in 1954 in her 1953 Studebaker, windows closed, winter day, Mom's cigarette burning in the ash tray. Mom was a smoker. My grandfather was a smoker. My aunts were smokers. My uncles were smokers. I don't know any smokers now, not even my mom.
My mom was paranoid about my safety. That Studebaker was one of the first cars in the U.S. to have seat belts, and my mom made me put it on every time we drove (it went from the passenger's side to the driver's side, one long strip). She watched who I played with, and made me keep in touch. When she learned about secondhand smoke, she altered her smoking behaviors so as not to endanger her children, and she eventually removed herself from the thrall of the tobacco industry. Who says people can't learn?
There is no solution to the gun problem in the US, but there are remedies, and we should pursue all of them. Here are a few:
Here is a list [[  http://www.opensecrets.org/orgs/recips.php?id=D000000082&type=P&cycle=2012&state&sort=A  ]]   of how much each of our elected officials got during this election season from the NRA.
If your Congressman or Senator took funds -- in some cases a grand or two, in some cases as much as eight grand -- then, you and your friends may go to him/her, and say (since you catch more flies with honey than with vinegar), "Representative So-and-so, I will give you exactly what the NRA has given you this election cycle if you will sign a pledge to refuse all funds from the NRA." And write your check. If he/she refuses, then make sure everyone on the internet knows the terms of his/her refusal.
There could be an anti-NRA super PAC that does precisely this. I am ready to join.
Do people you know invest in gun manufacturers? Mutual Funds you know? Investment banks you know? Is YOUR money invested in guns? Find out if it is. Refuse to invest in gun companies even if the stock is up (it is UP). Make sure those who invest in death are outed and shamed. Some will feel no shame (this is capitalism, after all) but some will. Every little bit counts.
Occupy the NRA. A nice non-violent protest at the headquarters of the NRA would be interesting. Stay off their property. Hold up large signs with pictures of shooting victims (you have thousands to choose from this year alone). Follow Wayne LaPierre every time he appears in public.
Never let Wayne or your gun loving friends forget how ridiculous NRA talking points are. Let's say a teacher has been packing heat in her classroom. Would she have worn a holstered gun on her hip every day, including during recess? I doubt it. And a Bushmaster wouldn't fit into a locked drawer in her desk. So let's say she has a Glock in her desk, and the parents don't know about it, and a man pushes open the door and starts firing his high capacity multi-round weapon. She looks for the key. She unlocks the drawer, she aims, she fires. Everyone is saved. I doubt it. In 62 mass murders, no armed NRA member has ever once made a difference. Stop talking about it, Wayne.
Liability insurance. According to the Public Services Research Institute "the average cost of a gunshot related death is $33,000, while gun-related injuries total over $300,000 for each occurrence," some 4.7 billion smackers every year. You and I are paying for most of these costs. Freedom, it turns out, is not free, but gun owners usually don't have insurance, and so they don't pay! Every gun needs to be like every car -- you can't use it unless you have liability insurance. Attached to every gun, there must be a policy that the purchaser has to sign, acknowledging the dangers of his purchase and paying for them up front.
I suggest the same for high volume clips. You can have it, but you have to pay for the privilege. And your policy has to be renewed every year, and if you have cost the insurance company a lot of money, then your rates go up. Insurance companies really do not like to pay out, and they are good enforcers, much better than the federal government. And then there is your license -- your gun license, like your driver's license, should state whether you have any "points" -- accidental killings, accidental woundings, failure to pay your insurance premiums. The cops should be able to stop you and look at your gun license, just the way they can look at your driver's license.
It's pretty clear when you think about it that gun lovers have used the 2nd Amendment not only to threaten us, and in some cases to kill us, but also to mooch off of us -- they have their fun, and we pay. That part has got to stop. You can have your guns, but you have responsibilities -- you have to keep track of them, you have to pay their real costs, you have to understand and acknowledge the consequences of owning them. So far, being a responsible gun owner has been voluntary, not obligatory. Now it has to become obligatory.
(Jane Smiley is a novelist and essayist. Her novel A Thousand Acres won the Pulitzer Prize and the National Book Critics Circle Award in 1992, and her novel The All True Travels and Adventures of Lidie Newton won the 1999 Spur Award for Best Novel of the West. Smiley's latest book is Thirteen Ways of Looking at the Novel, a history and anatomy of the novel as a literary form … published by Knopf. This article was posted first at HuffingtonPost.com)
-cw
CityWatch
Vol 10 Issue 102
Pub: Dec 21, 2012