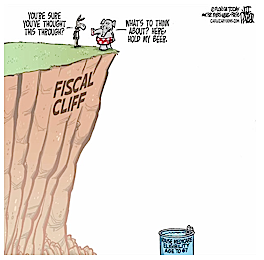 AT LENGTH - I find myself in this situation often enough that I’m moved to explain it more fully. I am stopped by one of my frequent readers, a critic, who wants to expound upon the demise of our economic stability or perhaps supremacy. He says, “We are going to end up like Greece. We can’t afford to raise the debt another trillion dollars so that the takers get more than the makers.”
In short, the sky is falling and we have to cut Social Security benefits, Medicare and everything except the defense budget, just to pay down the debt and balance the budget. And not only that, we’re not allowed to raise taxes on the rich.

This reader thinks he’s part of the upper class, when in reality, he is just a moderately successful real estate broker, with roots in the working class. He aspires to be a part of the one percent, but he is not even close.
Explaining that more of the burden of paying for government has been shifted to the middle and working classes over the last thirty years doesn’t seem to make much of an impression. Any mention of “class” in America is dismissed as irrelevant.
Explaining that the aggregate taxes paid by the 99 percent amounts to more money paid in total than whatever is paid by the one percent, is dismissed as impossible.
And explaining that taxes, paid by the non 1 percenters takes up a larger percent of their income than the guy who just paid sales tax on a Lamborghini, bought a $15 million mansion and has a wife who buys coach bags for $2,500–or is that $25,000?
My friendly critic doesn’t even get it when Warren Buffett explains that he pays less of a percentage of his income in taxes than his secretary does. Nor does he get that companies such as GE and Unocal Oil get rebates on their corporate taxes.
Of course the country is in debt. What do you expect after a decade of waging two wars at a billion dollars a day? What do you think was going to happen after having to bail out Wall Street bankers– bankers who were playing high stakes roulette with rigged mortgage bonds? How much longer do you think the middle class can afford to pay for the higher costs of public education while the 1 percenters buy their way into private schools?
The answer is not in cutting Social Security, Medicare and public education budgets as the Republicans in Congress seem to be arguing.
Years ago, when we first start publishing this newspaper, Americans were sold on the idea of “trickle-down” economics by President Ronald Reagan. “If we cut taxes on the wealthy, they would spend it on creating more jobs and increasing wealth, his proponents said.
Chris Edwards, director of tax policy at the  conservative Cato Institute wrote, “To Reagan’s credit, he had numerous fiscal policy successes, such as cutting the top individual tax rate from 70 percent to 28 percent and the corporate rate from 46 percent to 34 percent.
On spending, Reagan’s original February 1981 plan proposed enough cuts to bring outlays down to 19.3 percent of GDP by 1984 and balance the budget. …Congress unwilling to make serious cuts, the deficit remained high and spending was stuck at over 22 percent.”
The problem with Edwards’ definition of “fiscal policy success” is that it fundamentally shifted the tax burden on to lower income Americans. And with the advent of free trade agreements that encouraged the off-shoring manufacturing, job creation and wages for the working class was dampened and has remained virtually flat ever since.  If this was success, I think we would have preferred something less so.
What my friendly critic doesn’t understand about the “success” of the Reagan era is that these policies led to dramatic declines here in the Los Angeles Harbor Area. By the end of the 1980s, these policies resulted in the lost of a whopping 50 percent of its blue collar jobs in the Harbor Area, depressed the regional real estate market, and cast a cloud on all future economic growth not directly connected to the import economy of the ports.
The shadow on the Harbor region that these policies cast, continues to challenge the leadership of our community. It is only now being addressed with the considerable investments being developed  on the waterfront and the emergence of clean tech industry in the Harbor Area.
Instead of economic benefits, what has continued to trickle-down are the effects of austerity economics. Budget cuts to education, the announcement of the closing of our local courthouse, along with budget cuts to the City of  Los Angeles, these are all geared toward reducing the size of government, a Reagan era ideology. This will, in the end, spread greater pain for all– including my critic who cries for austerity or some balanced budget while he loses his right to justice at a court in his community. He, like others, have lost sight of just what is the “greater good.”
My advice for our Democratic Congressional Representatives is that if the Republicans really want to reduce the cost of Social Security and Medicare, then let their constituents pay for it! Instead of raising the eligibility age to 67 for everybody, eliminate benefits for those few who make more than $250,000 a year after they retire. After all, these programs are called “the social safety net” and they should be paid out to those who truly need them. Not to the Mitt Romneys of the country who can afford private health care.
I wonder, did Nancy and Ronald Reagan ever cash their Social Security checks or sign up for Medicare?
(James Preston Allen is the Publisher of Random Lengths News and an occasional contributor to CityWatch. More of Allen and other views and news at  randomlengthsnews.com where this column was first posted) –cw
CityWatch
Vol 10 Issue 101
Pub: Dec 18, 2012