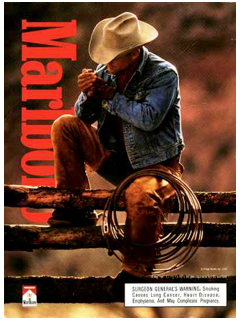 GUEST WORDS - Those of a certain age remember TV ads featuring the Marlboro Man – a rugged individual who rode a horse through an America that even then had long since disappeared.  He was self-reliant.  No moocher.  Didn’t need government handouts. Didn’t need government.  What he needed was cigarettes.
He inhabited Marlboro Country.  An imaginary nation populated by people who didn’t need each other.
The Marlboro Man is dead. Died of cancer.  Really.  Induced no doubt by those Marlboros he sucked down. Two other Marlboro Men also died of lung cancer.

Of course, the whole thing was an extraordinarily destructive myth – just like the myths the Republican’s have been selling for 30 years, now.  Rugged individuals who don’t need no gubmint’.
A private sector much like Marlboro Country – where all good things happen by pure serendipity, and where we don’t need no stinkin’ regulations or taxes.  Where small businesses are invoked as the modern-day equivalent of the Marlboro Cowboy.
This is the bull being marketed by Republicans to the American people.  In reality, conservatives have been working with giant corporations and the uber-rich to systematically siphon money and power into the hands of giant corporations and the obscenely wealthy.
This is why they’re threatening to take us over the fiscal cliff.  This is why they still characterize the uber-rich as “job creators,” even after it has been clearly shown that a healthy middle class is the real source of job creation.  And they continue to hawk tax cuts for the rich as their magic elixir for the economy long after it has been clearly demonstrated they reduce the middle class’s share of the economic pie, to the detriment of the economy.
Let’s say that again, in words that even Fox News and the Wall Street Journal can understand.  The whole trickle-down, job-creator approach to economic growth doesn’t work.  You get nada, zip, zero, zilch, n-o-t-h-i-n-g from it in terms of economic return.
How about austerity?  It has become glaringly obvious that austerity budgets in a time of economic slow-downs are a recipe for economic disaster.  It’s never worked in the past.  And now austerity budgets have brought on severe recessions in Spain, England, Ireland, and Portugal, and they are threatening to do so in France and Italy.
Austerity budgets are – and always have been – about disabling government. And so conservatives invoke hoary myths like the Marlboro Man and Marlboro Country – so they can justify cutting taxes to the bone. And then, when government can’t function because it’s been starved … well, that proves them right.
This economic philosophy will bring about the same end as that faced by the Marlboro Men.  A country dying from within.  Cancer in the case of the Marlboro Men, plutocratic power grabs in the case of our country.  Like cancer cells, the power of the plutocrats will grow exponentially, at the expense of the host, if left unchecked.
But it’s not just the fiscal cliff and faux austerity.  On issue after issue, Republicans are trying to take us back to that mythical Marlboro Country.
Climate Change?  No such thing, they tell us.  Incredibly, one of their lead spokesmen on climate policy – Senator James Inhofe -- is an ignorant know-nothing with no scientific training in hock to fossil fuel companies. Only in Marlboro Country would such a thing make sense.
Here again, as long as we inhabit Marlboro Country, Earth’s fate is likely to be the same as the one that befell the Marlboro Men – consumed by a sickness borne of an unholy brew of ignorance and greed.
What we need is a little political chemotherapy to excise these cancerous myths from our national dialogue once and for all.
You’d think this wouldn’t be too much to ask. We just had a national referendum on what kind of country we want, and progressives won.
But you would be wrong.
Obama may have the upper hand on the fiscal cliff, but he still talks of a grand bargain on taxes, benefits and debt; and he trembles at the thought of tackling climate change.
As nations met in Doha last week in an effort to tackle the greatest threat ever to face the world, the press was mute, and Democrats and the President refused to lead, while they continued to encourage drilling and appease Wall Street.
We are at a crossroads.  We face unprecedented challenges; we can see unprecedented opportunities.  We have a crumbling infrastructure; an educational system in decline; an economy that is robbing the majority to enrich a small minority; a climate that is rapidly changing in ways that will – literally – kill, maim, impoverish, starve and sicken man and beast.
Unfortunately, exit polls show that while a sizeable majority of Americans hold liberal views on an issue-by-issue basis, many people still buy the conservative meta-myths – a nation defined by dead and dying Marlboro Men living in a mythical and cancerous Marlboro Country.
Now is not the time for pragmatism, nor the time for negotiation.  It is a time that demands leadership.
There are far more dangerous cliffs in our immediate future than the fiscal cliff.  We can only avoid them if we reject the disastrous conservative myths that have infected our public discourse; replace them with values and principles that respect science, are based on reason and empiricism; and confront the axis of money and power that has absconded with our Democracy.
The Marlboro Man is dead.  He died of cancer.  We must root out the cancer within if we are not to share his fate as a nation.
(John Atcheson is author of the novel, A Being Darkly Wise, an eco-thriller and Book One of a Trilogy centered on global warming. His writing has appeared in The New York Times, the Washington Post, the Baltimore Sun, the San Jose Mercury News and other major newspapers. Atcheson’s book reviews are featured on Climateprogess.org. This piece was posted first at CommonDreams.org)
-cw
CityWatch
Vol 10 Issue 100
Pub: Dec 14, 2012