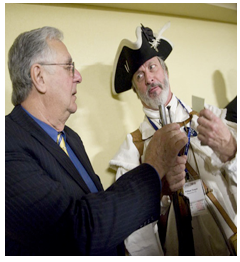 HUTCHINSON REPORT - The resignation of South Carolina Senator Jim DeMint from the Senate followed close on the heels of the desertion from the Tea Party of Freedom Works head Dick Armey took some by surprise.

DeMint and Armey were the two biggest and most identifiable fish in the Tea Party affiliated pond. DeMint could be relied on to broker his name ID and prodigious fund raising prowess to every Tea Party backed Senatorial candidate—and loser.
Armey was a tireless advocate at big, stagey Tea Party rallies and confabs for the Tea Party’s anti-big government hard line message. Now both are out.
If that wasn’t bad news enough for the Tea Party, GOP conservative House leaders turned on it and ousted Representatives Tim Huelskamp of Kansas and Justin Amash of Michigan two of the loudest Tea Party position advocates from the House Budget Committee. They were kicked to the curb almost certainly because GOP House leaders know they have to make a deal with President Obama on the budget or risk being further dragged through the public and media mud as being the  cause for shoving the nation over the fiscal cliff.
The Tea Party’s brand of patented loose cannon obstructionism is too threatening to a GOP still reeling from the election flop.  The ouster of the Tea Party hardliners and desertions by GOP bigwigs from the movement was hardly the first rumbling that the lights are dimming for the Tea Party.
A year earlier, polls showed that far more Americans had an unfavorable view of the Tea Party than when it roared on the scene a couple of years earlier. The disaffection cut across all lines and that included many conservatives.
The reason for the plunge in Tea Party backing in Red State districts support wasn’t hard to find. When Tea Party affiliated candidates scored big victories and even upsets of GOP incumbents in some races in 2010 they had one mantra and that was to shrink government, and shrink it fast.
Millions of Americans cheered their war call, and voted for the candidates that yelped it the loudest. But it’s one thing to scream about big government, bloated federal spending, and whopping federal debts, and it’s quite another to actually hold Congress, and by extension, the nation hostage in an uncompromising, shrill battle to chop down government.
The Tea Party, in effect, wildly overreached and many conservatives didn’t like it.
Tea Party backed congressional members stalled every piece of legislation that might have put people back to work, demanded draconian slashes in Medicare and Social Security, gummed up the works on debt reduction talks between Obama and GOP House leaders, and wasted congressional time and energy passing bills and amendments to kill health care reform as well as education, health, social service and law enforcement programs locally and nationally. The result was that Congress was at a virtual stall for two years and public approval of Congress dropped to lows that made used car salespersons look like public champions
The open backlash against the Tea Party wasn’t lost on GOP mainstream leaders, who even in the best of Tea Party days were anxious, if not downright terrified, that their shock battalions might get to unruly, and go too far overboard, and alienate the moderate and conservative independents that they got back in the GOP fold in 2010. They desperately needed them to have any chance of beating Obama in 2012. Obviously, that didn’t happen. Now with the 2014 mid-term elections shaping up to be a titanic battle for the GOP to hold onto the House and not lose any more ground in the Senate, open advocacy of Tea Party positions becomes even more of a risk.
The GOP with the Tea Party drag on it would have absolutely no chance to make any headway on immigration reform. That would kill the slender chance it had to soften opposition from Hispanic voters to the GOP. It would also turn off thousands more conservative voters who want to see government get back on track and get results.
The Tea Party is far from dead. There are  many Americans that still think the idea of smaller government, caps on spending, and debt reduction are noble and necessary goals worth fighting for.
Millions of them voted for failed GOP presidential candidate Mitt Romney solely because they bought into his promise to shrink government.  Though a majority of Americans now back Obamacare, a significant minority still don’t. And they will continue to make noise.
That and having the Tea Party label attached to the GOP is a huge liability that GOP leaders can no longer afford.
(Earl Ofari Hutchinson is an author and political analyst. He is a frequent political commentator on MSNBC and a weekly co-host of the Al Sharpton Show on American Urban Radio Network. He is the author of How Obama Governed: The Year of Crisis and Challenge. He is an associate editor of New America Media. Follow Earl Ofari Hutchinson on Twitter: http://twitter.com/earlhutchinson)
-cw
CityWatch
Vol 10 Issue 99
Pub: Dec 11, 2012