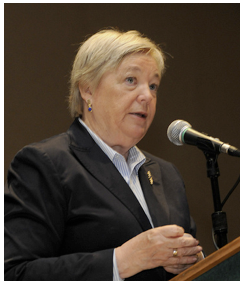 FISCAL CLIFF CLARITY - Congress is likely to remain in session until Christmas Eve -- wrangling over the looming sequester and expiration of the Bush tax cuts.

The country doesn't have enough money, or doesn't spend it right, or the rich have too much of it, or the middle class doesn't have enough, or the poor get too much in the way of handouts.
If lawmakers don't do something quick, on January 1st we're all going to turn into Thelma and Louise and go over a cliff. But this time it won't be the Grand Canyon. It's something called the fiscal cliff.
Who's right? Who's wrong? And most of all, who gets pushed over first? According to Dr. Heidi Hartmann, President of the Institute for Women's Policy Research in Washington, it's likely to be women and kids. Here's what she had to say when I interviewed her for my radio show Equal Time With Martha Burk.
MB: If the sequester actually is implemented, it will cause a lot of pain, and some people, including Federal Reserve Chairman Ben Bernake, say it will bring another recession.
HH: If it went through and all of it actually happened in 2013, then yes, it would. But remember the whole idea was to keep that from happening -- to make it so obnoxious [the Congress] would do something different. This whole trigger is simply because Congress voted for it. Congress could vote today to eliminate the trigger, and then we would just be keeping the budget that already passed.
MB: In the 2011 Budget Control Act, which mandated the looming sequester, there are big cuts to discretionary spending. What programs will suffer the most, particularly affecting women?
HH: There are many, many things. The Maternal and Child Health block grant, Title X Family Planning, the Child Care and Development block grant that supports Head Start, child support enforcement. Food stamps are cut to some extent, and other food supplements like school breakfast and lunch programs. There's unemployment insurance, Pell education grants, housing assistance, home energy assistance. We could go on and on.
MB: What about cuts that were made in 2011? Are they ever going to be restored?
HH: Those cuts, which were already agreed to by the Democrats, are the main reason that some Democrats are saying that all of the solution to the problem should now be on the revenue side.
MB: The Bush tax cuts are due to expire at the end of the year, along with the payroll tax cut, and some unemployment benefits will be lost. But some economists are saying the so-called fiscal cliff is more like a fiscal slope. So can we afford to wait on a new Congress and just let all this happen?
HH: I do think we can afford to wait. The danger of waiting is uncertainty for individuals and the markets. But I agree it's more of a slope. You have a lot of people on the left saying "let it happen." Once the tax cuts go away, the Republicans are given a free hand to give a tax cut to the middle class and the poor. They just don't have to give it to the rich.
MB: What about passing some kind of stopgap? Would that do any good?
HH: A stopgap would make it official that we're not doing anything right away -- the Congress is giving itself more time. But it would give people more confidence that nothing drastic will happen on January 1st.
MB: The payroll tax cut was put in at the height of the recession, and it was temporary. If it expires, how is that going to affect women specifically?
HH: It's a 2 percent reduction from 6.2 percent to 4.2 percent . That's $400 in savings to a woman making $20,000 a year, and it can be significant -- several weeks of groceries, a couple of car repairs, half a month's rent. Lower income workers [mostly women] spent that money on bills, food, and transportation. That payroll tax cut is worth $120 billion to families and to stimulate the economy.
MB: What's going to happen?
HH: I believe the Congress realizes that as much as we want to cut the debt in the long term, we don't want to do it while the economy is still tender. Most people agree that making the higher rate go into effect for those making over $250 thousand a year will not negatively affect the economy. We need to continue to stimulate the economy, so I hope something will be done to extend that payroll tax cut or substitute another tax cut for the poor and middle class.
(Martha Burk is a political psychologist and women's issues expert who is co-founder of the Center for Advancement of Public Policy, a research and policy analysis organization in Washington, DC. She serves as the Money Editor for Ms. magazine, and is a syndicated newspaper columnist and frequent blogger for Huffington Post. In January 2012 she launched a new national show on public radio, "Equal Time with Martha Burk."  This column was posted at huffingtonpost.com)
-cw
CityWatch
Vol 10 Issue 99
Pub: Dec 11, 2012