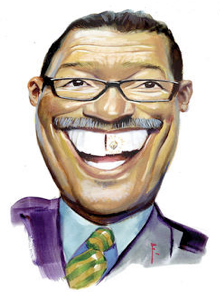 LA WATCHDOG - Right before Thanksgiving, the Herb Wesson led City Council delivered all hard working Angelenos a giant stuffed turkey by approving the placement of a measure on the March ballot to increase the City’s sales tax by a half cent, resulting in to an economy crippling 9.5%, one of the highest in the nation.
While the turkeys that occupy City Hall will continue to tell us that they have accomplished heroic feats in balancing the budget and curing the Mayor Villaraigosa’s Structural Deficit (where labor costs grow at a substantially faster rate that the increase in revenues), we are still facing a $216 million deficit next year, primarily because of out of control increases in salaries, benefits and pension contributions of $300 million.

The City is also projecting a $1.1 billion deficit over the next four years, in large part because labor costs are going through the roof, increasing by a projected $768 million.
But the City Council continues to have its head who knows where, refusing to address the issue in a meaningful way.
Even Mayor Villaraigosa, a new member of the steering committee for the “Campaign to Fix the Debt,” has not devised any meaningful solutions other than public private partnerships for the Zoo and the Convention Center, two operations that comprise less than 1% of the General Fund.
Mayor Villaraigosa, Controller Wendy Greuel, Herb Wesson and the rest of the City Council have yet to answer the question: “What is your plan to balance the budget, fix streets, and fully fund the City’s pension plans.”
As part of the election process, the City prepares an information pamphlet that is mailed to all voters about a month in advance of the election.  This document will provide detailed information on the ballot measures, including Proposition A, the “Neighborhood Public Safety and Vital City Services Funding and Accountability Measure,” a title that could have only been dreamed up by a bunch of scheming politicians out to snooker us.
The same applies to the one sided wording of the question on the ballot:
“To offset severe and repeated State cuts and provide funding for: 911 emergency response services; maintaining firefighter, paramedic, and police officer staffing levels; continuing community policing, senior services, after-school gang and drug prevention programs; repairing potholes and sidewalks; and other general municipal services; shall the City of Los Angeles enact a one-half cent transactions and use (generally referred to a sales) tax, with required independent audits, public review of expenses, and all funds used locally?”
The information pamphlet will also contain arguments for and against the ballot measure as well as rebuttals.
So in an effort to keep readers of CityWatch informed about the status of the ballot measure, we are publishing the argument opposing Proposition A. Under the City Clerk’s guidelines, arguments for and against the measure are limited to 300 words, a tough task when there is so much to say about how the City’s finances and operations have been abused and mismanaged by the turkeys that occupy City Hall.
But in considering this ballot measure to increase our taxes by over $200 million, ask yourself the question:
Do you trust City Hall and the Herb Wesson led City Council to handle your money in a responsible and prudent manner?
The Opposing Argument:
DEMAND REAL BUDGET REFORM. VOTE NO ON THE REGRESSIVE SALES TAX
City Hall has failed year after year to control runaway spending.  Now it wants us to cover up its addiction with a permanent half cent increase in our sales tax, jacking it up to a crippling 9.5%, one of the highest in the nation.
This sales tax hike is bad for LA, bad for hard working Angelenos, bad for job creating businesses, and bad for the City’s reputation. It’s a regressive tax that will have a disproportionate impact on working and middle class Angelenos, and encourage consumers to shop in nearby lower taxed cities.
Worst of all, it doesn’t solve the budget crisis, and will make finding real solutions so much more difficult in the future while delaying desperately needed repairs to our streets, sidewalks, and other infrastructure.
For example, the $215 million in new revenue will not even cover next year’s $300 million increase in labor costs or the $768 million escalation over the next four years.
Our elected officials continue to mislead us about the City’s finances. The steps they have taken in four years of economic challenge have been grossly inadequate.
Paying off workers to retire early added to the massive unfunded pension liability.  Transferring workers to the DWP contributed to soaring water and power rates. Increased employee pension contributions are dwarfed by the salary increases of 25% since 2005.
The Mayor’s pension “reform” plan saves only about 1% of the $1.3 billion of the city’s pension contribution in 2017. And the City Council contemptuously ignored Mayor Riordan’s call for real pension reform.
It’s time for City Hall to stop “kicking the can down the road” to insolvency.
It’s time for real REFORM.  Don’t reward bad behavior.  Vote NO on Proposition A.
●●●
(Jack Humphreville writes LA Watchdog for CityWatch. He is the President of the DWP Advocacy Committee,  the Ratepayer Advocate for the Greater Wilshire Neighborhood Council, and a Neighborhood Council Budget Advocate. Humphreville is the publisher of the Recycler Classifieds -- www.recycler.com. He can be reached at: [email protected])
-cw
CityWatch
Vol 10 Issue 99
Pub: Dec 11, 2012