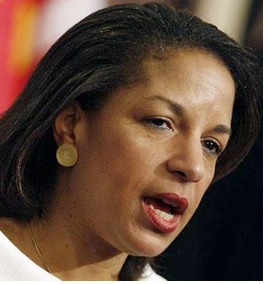 CABINET POLITICS - President Barack Obama should ditch the idea of nominating U.S. Ambassador to the U.N. Susan Rice to be the next Secretary of State on substantive grounds, not because she may have – knowingly or not – fudged the truth about the attack on the poorly guarded CIA installation in Benghazi, Libya.
Rice’s biggest disqualification is the fact that she has shown little willingness to challenge the frequently wrongheaded conventional wisdom of Official Washington, including on the critical question of invading Iraq in 2003. At that pivotal moment, Rice essentially went with the flow, rather than standing up for the principles of international law or exposing the pro-war deceptions.

In fall 2002, as President George W. Bush and his administration were pounding the drums for war, Rice wasn’t exactly a profile in courage. A senior fellow at the centrist Brookings Institution, she echoed the neoconservative demands for “regime change” in Iraq and doubted the “need [for] a further [UN Security] Council resolution before we can enforce this and previous resolutions” on Iraq, according a compilation of her Iraq War comments compiled by the Institute for Public Accuracy.
In an NPR interview on Dec. 20, 2002, Rice joined the bellicose chorus, declaring: “It’s clear that Iraq poses a major threat. It’s clear that its weapons of mass destruction need to be dealt with forcefully, and that’s the path we’re on. I think the question becomes whether we can keep the diplomatic balls in the air and not drop any, even as we move forward, as we must, on the military side.” (Read the rest … including Rice’s reaction to Colin Powell’s UN speech).
-cw
CityWatch
Vol 10 Issue 98
Pub: Dec 7, 2012