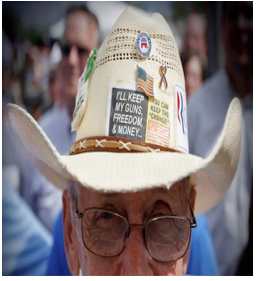 POLITICS - Demographics cuts both ways.  While numerous commentators have skewered Republicans for alienating Latino and other minority voters in 2012, and the GOP is paying a huge price for it, there is another important demographic story: the collapse of the Democratic Party among white voters throughout America’s heartland.  That collapse cost Democrats control of the House of Representatives this cycle.

President Obama’s Electoral Vote landslide and the surprising surge for Democrats in the Senate were not replicated in the House.  While Democrats made modest gains, they fell well short of reversing their 2010 losses that gave Republicans control of the House.  If anything, the 2012 results suggest Republicans now have a lock on the House of Representatives.
Democrats have a quick and easy answer: those nasty Republicans gerrymandered us out of our seats in states where they controlled the redistricting process.  But that dog won’t hunt when you look at the actual state results.  Democrats gained six seats in two states, California and Arizona, where state commissions drew the lines and created marginal districts.  In other big states, New York had a bipartisan plan and both parties lost seats in 2012; Texas had a court drawn plan and Republicans lost an incumbent there.  In Florida, Republicans controlled the whole redistricting process but lost two incumbents.
In five Midwestern states, Republicans did have the governor and both houses of the legislature: Pennsylvania, Ohio, Wisconsin, Michigan and Indiana.  In these states, however, the GOP legislatures simply shored up vulnerable incumbents, and probably protected six to eight seats they might otherwise have lost.  But the biggest gerrymander of all was in Illinois where Democrats drew the lines and took away four Republican seats.  The GOP tried to return the favor in North Carolina, but only netted three new seats.  And in Georgia and Utah, GOP attempts to gerrymander conservative Democrats out of their seats failed.
It is obvious that the failure of Democrats to regain the House was not a result of gerrymandering, but of the rapid decline of Democrats among white voters.  This was first apparently in the Old South where over the past two decades the Democratic Party has been pretty much reduced to African American majority seats.  But in the past two cycles the same thing has happened to Democrats in the border states.
For the first time since the Civil War, there are no Democrats in the House delegation from Arkansas and Oklahoma; states that were once the backbone of the Democratic majority in Congress.  There is only one Democrat from Kentucky and West Virginia, and two from Missouri.  Among the largest southern states (all battlegrounds for president), there are only seven white Democrats of the 27 representatives in Florida, only three of 13 in North Carolina, and only two of 11 in Virginia.
Texas really tells the story.  Two decades ago, a majority of Texas members of congress were Democrats and included several powerful committee chairmen.  That began to end with the GOP sweep in 1994, and in 2002 Republicans took over the Texas legislature.  They then enacted a brutal gerrymander that decimated Democrats for good.  But this year the matter was taken away from the legislature and the federal courts imposed a temporary plan to achieve an increase in minority representation commensurate with Texas’ population growth.
The upshot is that Texas, at 36 seats the second largest delegation in the nation, elected 24 Republicans and just 12 Democrats.  But of those 12 Democrats, only three are white Democrats.  And that is the Democrats’ problem: minority Democrats hold nearly every heavily minority seat in the heartland states, but almost none of the predominantly white districts.
This results from several factors.  The national party in congress, headed by Minority Leader Nancy Pelosi (D-San Francisco), is too liberal, especially on social issues, for moderate white voters outside the two coasts.  The Voting Rights Act has required drawing minority seats, and that has tended to concentrate minority voters.  The “Blue Dog” Democrats, who could appeal to moderate white voters, have mostly disappeared from congress.
California will send 38 Democrats to congress in 2013, the largest number of Democrats any state has ever had.  But all will be in the minority party, and no matter their seniority, not one will be a power player.  And that is unlikely to change anytime soon.
(Tony Quinn is a political commentator and former legislative staffer. This column was first posted at foxandhoundsdaily.com) –cw
CityWatch
Vol 10 Issue 95
Pub: Nov 27, 2012