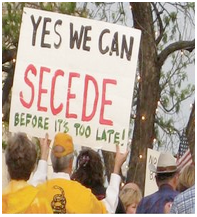 CERDAFIED - "Governments derive their just powers from the consent of the governed ... Whenever government becomes destructive to life, liberty, or property [i.e., the pursuit of happiness], it is the right of the people to alter or to abolish it... It is their right, it is their duty, to throw off such government, and to provide new guards for their future security."
— American Declaration of Independence (1776)