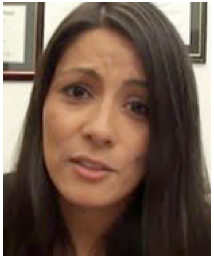 OPINION: Andrea Alarcon's $130K a year position as head of the Public Works Commission puts her directly in charge of many of the City's top public safety issues, even while men and women twice her age must answer to her judgments.  But she has now fumbled in providing for the personal safety of her own daughter twice, and should not be able to seek unspecified "treatment" while serving at the public's mercy.
[UPDATE: Alarcon takes leave of absence --media do not specify if it's paid or unpaid.]
[UPDATE II: reader reports that KNX and NPR affiliates report that Alarcon's LOA is paid out of her sick days]

Thanksgiving day, my site was getting some unusual traffic.  I could see that a whole lot of people in town were googling the name "Andrea Alarcon", about whom I've written without pulling many punches over the past two years.
Only this morning did I learn why the traffic was happening.  Andrea Alarcon's 11-year-old daughter was found wandering City Hall alone last Friday about 11:45 p.m.    Alarcon herself did not turn up to locate her daughter until about 2 a.m.
The story was held by our local fishwrap the LA Times from last Saturday until Thanksgiving day.
Andrea Alarcon, daughter of the Councilman Richard Alarcon and mother of the goddaughter of the Mayor, was appointed to head the Public Works Commission three years ago, at the tender age of thirty-one.
This is a person who doesn't have some cush low-profile but well-paying job in our Public Works Department.  No, this is a person who heads our Public Works Commission. Now thirty-three years old, she makes decisions that impact countless city venues and events and approves contracts for tens of millions of dollars. (The rest of Joseph Mailander … including who and what her decisions impact and shame on media and Mayor-wannabes … here.)
(Joseph Mailander is a writer, an LA observer and a contributor to CityWatch. He is also the author of New World Triptych and The Plasma of Terror. Mailander blogs at www.josephmailander.com.) Photo credit: Dan Krauss
-cw
CityWatch
Vol 10 Issue 95
Pub: Nov 27, 2012