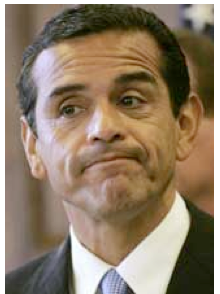 INSIDE CITY HALL - In 1925, the people of Los Angeles voted to approve a new City Charter. And since that Charter represented the will of the people, it could be changed only by the people themselves. Thus, during its life, the 1925 Charter was amended 86 times, each time by a vote of the people.
In 1999, the people of Los Angeles again approved a new City Charter. But the Charter the voters approved wasn’t acceptable to Mayor Riordan. He rejected the Civil Service provisions of the new Charter, and wanted them changed.

Riordan’s plan was to degrade the Board of Civil Service Commissioners. In his proposal, the Board would no longer serve as a firewall between the Mayor and the civil service. And City departments would no longer be subject to the Board’s oversight. In fact, departments would be expected to manage themselves.
The Mayor must have known that, in a democracy, the people have a right to be heard on matters that affect them. But he was afraid the people would think the changes he sought were too radical.  In his view, putting that proposal on the ballot would be risky. So he persuaded the City Council to join him in forcing his
“New Paradigm” on City Service without a vote of the people!
It’s now been 13 years since the current City Charter was approved by the voters. Since then, the people have voted on 14 change proposals.  But they have never been allowed to vote on the radical change the Mayor and the Council inflicted on them. Indeed, the people haven’t even been told that the civil service system they approved has been wrecked—by the politicians they’d elected!
Think about that. For the past 13 years, those politicians have violated a Charter provision Angelenos approved. They’ve degraded a Civil Service Board the people voted for. And they’ve done that by stealth—without a vote of the people!
As this column is written, the City’s civil service system is in disarray. Rules are not enforced. Rule violations are not investigated. Employment practices are not monitored. The management of employee performance is scandalously inept. And the heads of City agencies are virtually unaccountable.
Clearly, this chaotic situation must end. By rights, all needed corrections should be made by Mayor Villaraigosa. He supported the Riordan plan; he enhanced his own power by stepping on the people’s right to be heard. In my view, the Mayor owes the people of Los Angeles an explanation. Indeed, I think he has a duty to fix civil service before he leaves office.
If you agree with me, you may want to contact the Mayor and tell him what you think. You can call him at (213) 978-0600, or send an E-mail to: [email protected]
(Samuel Sperling is a City Hall watchdog who writes for the Tolucan Times. Check out other writers and reporters … including Greg Crosby … at tolucantimes.info) You can reach Samuel Sperling at: [email protected]) –cw
CityWatch
Vol 10 Issue 94
Pub: Nov 23, 2012