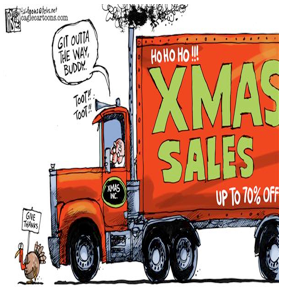 THANKSGIVING 2012 - Thanksgiving is a wonderful holiday where we take a day to spend time with our loved ones and openly express our gratitude for the food on our tables, love in the air and that tingly feeling we get when we realize how lucky we are. Like an anvil out of a Looney Tunes cartoon, Black Friday careens down on Thanksgiving and obliterates any heartwarming aspect of this rare moment we pretend to be thankful for the small things.  How can’t this be the most wonderful time of the year?

Thanksgiving has managed to overcome its history of European settlers kicking native people from their land and transformed into a wonderful message of taking a day to stop and appreciate all that is good in your life.  It’s a beautiful sentiment we should adopt daily, but it’s really hard to focus when there are once-in-a-lifetime doorbusters only available until 1 a.m. that will probably be broken before you even get them home.
Maybe I’m aging myself, but there was a time when Black Friday actually happened on Friday.  As the craze increased for deals on toaster alarm clocks and other nonsense you find for Christmas, retailers have been opening earlier and earlier to accommodate post-turkey binge shopping.  This year, stores are being cute by saying they’re opening their doors for Black Friday, but in reality, they’re hardly closing them on Thursday.
Target, Walmart and Toys R Us are going to open Thanksgiving night, barely giving Grandma time to dose off after her third slice of pie.  I’m sure it’s super important to get the latest and greatest gifts – let’s face it, who doesn’t want to be a superstar on Christmas?  Is it so vital to rush out before the tryptophan even has time to kick in?  I think it’s nuts people go out at midnight on Black Friday, but at least Thanksgiving is technically over.  Opening up at 8 p.m. on Thursday is diverting our gluttony from food to shopping.
Sure, we can point our fingers at greedy corporations who look to squeeze every last dime from our pockets before the year ends, but they wouldn’t waste their electricity opening at an ungodly hour unless shoppers weren’t already lined up ready to throw cash their way.  It’s your fault, common man.  If you weren’t trampling people to death to get a stupid deal on a piece of junk during the graveyard shift, I wouldn’t have to complain about Christmas shopping interrupting Thanksgiving.
It may be my paranoia acting up, but I can’t help but I feel like we’re the butt of some kind of corporate joke.  Would you be surprised if the CEOs from these box stores all got together to place bets on what kind of ludicrous stipulations they can put on their sales just do see how many of us fall for it?  It’s like the movie “Rat Race” when John Cleese and his wealthy friends bet on which maid can climb the curtains the fastest.  Except, real life isn’t rated PG-13, so the Black Friday frenzy surpasses elbow throwing and jumps to skull crushing.
I value my life too much to even think about witnessing the pandemonium of early morning shopping this Friday.  When I roll out of bed, I will still be full of regret from everything I shoved in my gullet the night before, and there will be thousands of people I’d like to avoid who have been awake for over 24 hours gouging people’s eyes out over Barbie dolls.
So this Thanksgiving, I will be especially thankful for keeping my body intact and unharmed while I go shopping late in the day on Friday after the early risers go home.  You know, 9 a.m.
(Kristen Tornoe is a humor writer and owner of the humor magazine Delaware Punchline. Follow Punchline on Facebook at Facebook.com/DelPunchline.   This article was posted first at America’s favorite political cartoon site: cagle.com)
-cw
CityWatch
Vol 10 Issue 94
Pub: Nov 23, 2012