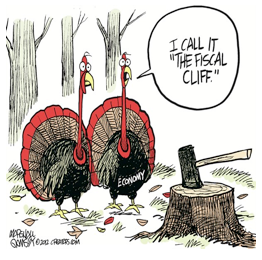 ALPERN AT LARGE - The post-election politics have given way to a new round of political double-speak and rhetoric, with new talk from both political parties of how “we must work together in a bipartisan fashion to avoid the fiscal cliff” while virtually in the same breath spouting off how neither side will give in without some key compromise from the other side.