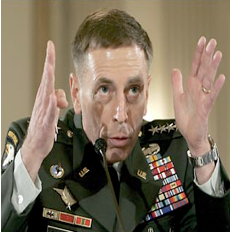 GUEST WORDS - FASTIDIOUSNESS is never a good sign in a general officer. Though strutting military peacocks go back to Alexander’s time, our first was MacArthur, who seemed at times to care more about how much gold braid decorated the brim of his cap than he did about how many bodies he left on beachheads across the Pacific. Next came Westmoreland, with his starched fatigues in Vietnam. In our time, Gen. David H. Petraeus has set the bar high. Never has so much beribboned finery decorated a general’s uniform since Al Haig passed through the sally ports of West Point on his way to the White House.

“What’s wrong with a general looking good?” you may wonder. I would propose that every moment a general spends on his uniform jacket is a moment he’s not doing his job, which is supposed to be leading soldiers in combat and winning wars — something we, and our generals, stopped doing about the time that MacArthur gold-braided his way around the stalemated Korean War.
And now comes “Dave” Petraeus, and the Iraq and Afghanistan conflicts. No matter how good he looked in his biographer-mistress’s book, it doesn’t make up for the fact that we failed to conquer the countries we invaded, and ended up occupying undefeated nations.
The genius of General Petraeus was to recognize early on that the war he had been sent to fight in Iraq wasn’t a real war at all. This is what the public and the news media — lamenting the fall of the brilliant hero undone by a tawdry affair — have failed to see. He wasn’t the military magician portrayed in the press; he was a self-constructed hologram, emitting an aura of preening heroism for the ever eager cameras.  (The rest of Truscott’s piece … including Petraeus’ non answer to ‘What are your orders?’ … here)
-cw
CityWatch
Vol 10 Issue 93
Pub: Nov 20, 2012