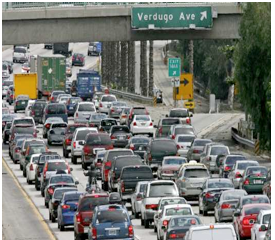 It has now been four years since Measure R passed and several new freeway lanes and light rail lines have been added. Do you see any traffic relief? “No!” because both measures were really nothing more than welfare for land speculators; making existing residents pay for the transportation infrastructure required to accommodate the traffic from density-increasing land development projects because cities and the county are not willing to make the developers pay for it.
In 2008, the Los Angeles County Metropolitan Transportation Authority (Metro) lead voters to believe that their proposed Measure R, which levied the original one-half cent sales tax increase, would bring us relief from our traffic congestion problems.
They conned us into approving Measure R. However, Metro’s own 2008 Long Range Plan, which was used to justify Measure R, shows that even after spending the $150 Billion to be raised by the higher sale tax, county average freeway speeds are expected to be 32% slower and arterial travel speeds 27% slower than in the base year.
All the higher sales tax will do for existing residents is prevent average freeway speeds from further declining by another 3 mile per hour on freeways and another 2 MPH on arterial streets. So, Metro, “Where’s the relief?”
How does making us pay $150 Billion for new transportation infrastructure end up making congestion worse? Simple. Any additional money they can extract from us is looked at by city and county politicians as justification to approve more traffic generating projects for their land speculator-developer friends who fund their political campaigns.
Unlike the area’s original developers who built all the original roads and passed that cost on to their buyers, today’s land developer aren’t required to pay for the infrastructure required to accommodate the additional commuters their projects add to the area.
Although I can’t speak for other cities, the last time I looked at LA City’s internal traffic impact assessment and mitigation policies, developers could build over a hundred general-market condos and over 500 so-called “Senior Living” condos and not pay a dime to mitigate the impact of all that additional traffic on the rest of us.
Even when a project is large enough to  require payment of a traffic impact assessment fee, they are only charged a nickel for every dollar it cost to accommodate the commuters their project add.
But traffic congestion would not be solved even if we are willing to pay the other 95% of the cost because cities habitually approve more traffic-generating development than can be accommodated on the streets and transit systems that will exist by project occupancy.
I have seen projects approved where traffic demand will be 185% of infrastructure capacity, almost twice what the streets and transit systems, both existing and planned, will accommodate. Only a fool (or a paid-off politician) would do something this irresponsible.
So regardless of how much tax money we were to give Metro, until cities and the county stop approving more traffic-generating development than can be accommodated, it won’t be enough the bring any meaningful “traffic relief” to those of us paying the [tax] bill.
If you own property, you have already paid a very inflated price for the existing roads because the cost of those roads was included in what you paid for your property. Measures R is now making you pay for the mass transit systems to accommodate some (but not even most) of the next wave of people moving here.
And Measure J would have required you to pay even more. So until city and county politicians start being responsible to they their constituents rather than responsive to their developers friends, don’t give them another dime.
PS: The traffic assessment and mitigation policies and practices being used internally in the City of Los Angeles at least as of 2010 are contributing to the above problems.  Those policies are in violation of the City’s State-mandated General Plan Policies, which probably makes the City in violation of State law.
If any sharp lawyer wants to pursue a class action suit on behalf of damages being suffered by commuters, or a wrongful death claim resulting from emergencies services being stuck in grid-lock, I will be happy to send you the evidence.
(Bill Pope is a former traffic consultant to neighborhood councils. He can be reached as [email protected])
-cw
CityWatch
Vol 10 Issue 92
Pub: Nov 16, 2012