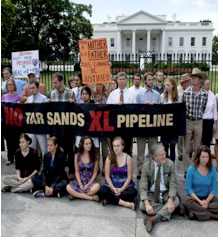 PEOPLE POWER - The election is over and President Barack Obama will continue as the 44th president of the United States. There will be much attention paid by the pundit class to the mechanics of the campaigns, to the techniques of microtargeting potential voters, the effectiveness of get-out-the-vote efforts.

The media analysts will fill the hours on the cable news networks, proffering post-election chestnuts about the accuracy of polls, or about either candidate’s success with one demographic or another.
Missed by the mainstream media, but churning at the heart of our democracy, are social movements, movements without which President Obama would not have been re-elected.
President Obama is a former community organizer himself. What happens when the community organizer in chief becomes the commander in chief? Who does the community organizing then? Interestingly, he offered a suggestion when speaking at a small New Jersey campaign event when he was first running for president.
Someone asked him what he would do about the Middle East. He answered with a story about the legendary 20th-century organizer A. Philip Randolph meeting with President Franklin Delano Roosevelt. Randolph described to FDR the condition of black people in America, the condition of working people. Reportedly FDR listened intently  then replied: “I agree with everything you have said. Now, make me do it.” That was the message Obama repeated.
There you have it. Make him do it. You’ve got an invitation from the president himself.
For years during the Bush administration, people felt they were hitting their heads against a brick wall. With the first election of President Obama, the wall had become a door, but it was only open a crack. The question was, Would it be kicked open or slammed shut? That is not up to that one person in the White House, no matter how powerful. That is the work of movements.
Ben Jealous is a serious organizer with a long list of accomplishments, and a longer list of things to get done, as the president and CEO of the National Association for the Advancement of Colored People,  2013, he notes, is a year of significant anniversaries, among them the 150th anniversary of President Abraham Lincoln’s Emancipation Proclamation, the 50th anniversary of the 1963 March on Washington, as well as the 50th anniversaries of the assassination of Medgar Evers and the Birmingham, Ala., church bombing that killed four young African-American girls. President Obama’s 2013 Inauguration will occur on Martin Luther King Jr. Day. Jealous told me on election night, as Mitt Romney was about to give his concession speech, “We have to stay in movement mode.”
Young immigrants are doing just that.  Undocumented students, getting arrested in sit-ins in politicians’ offices, are the modern-day civil-rights movement.  There are other vibrant movements as well, like Occupy Wall Street, like the fight for marriage equality, which won four out of four statewide initiatives on Election Day.
In the aftermath of Superstorm Sandy, and despite the enormous resources expended by the fossil-fuel industry to cloud the issue, climate change and what to do about it is now a topic that President Obama hints he will address, saying, in his victory address in election night, “Democracy in a nation of 300 million can be noisy and messy and complicated. ... We want our children to live in an America that isn’t burdened by debt, that isn’t weakened by inequality, that isn’t threatened by the destructive power of a warming planet.”
It was pressure from grass-roots activists protesting in front of the White House that pushed Obama to delay a decision on the controversial Keystone XL pipeline, proposed to run from Canada to the Gulf of Mexico. More than 1,200 people were arrested at a series of protests at the White House one year ago. Now a group is blocking the construction of the southern leg of that pipeline, risking arrest and even injury, with direct-action blockades in tree-sits and tripods in Winnsboro, Texas, two hours east of Dallas.
When those who are used to having the president’s ear whisper their demands to him in the Oval Office, if he can’t point out the window and say, “If I do as you ask, they will storm the Bastille,” if there is no one out there, then he is in big trouble. That’s when he agrees with you.  What about when he doesn’t?
The president of the United States is the most powerful person on Earth. But there is a force more powerful: People organized around this country, fighting for a more just, sustainable world. Now the real work begins.
(Amy Goodman is the host of “Democracy Now!,” a daily international TV/radio news hour airing on more than 1,000 stations in North America. She is the author of “Breaking the Sound Barrier,” recently released in paperback and now a New York Times best-seller. Denis Moynihan contributed research to this column. This article was posted first at truthdig.com)
-cw
CityWatch
Vol 10 Issue 90
Pub: Nov 9, 2012