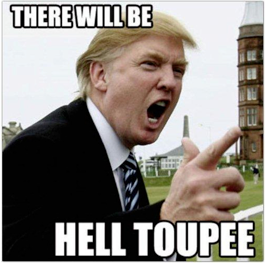 ELECTION night LOW LIGHT - Tuesday, Nov. 6, 2012, will go down in history as a great day for America. Not just because Barack Obama was elected to a second term, or because Tammy Baldwin became the first openly gay senator in American history, or because of the strides made toward marriage equality in four states, or because a bunch of old men who want to take away your right to reproductive choice were sent on their way.

That was all awesome, for sure. But it was a great day because it may well have been, after numerous false starts, the real beginning of the end of our long national nightmare known as Donald Trump.
We’ve tried covering our ears and going “Lalalalala I can’t hear you!” for years, but he’s always somehow still been here, horking out his bile.
The thing about a guy like the Donald is that he’s so big, so loud, so shamelessly gaudy that he’s cleverly managed to make a whole career out of being terrible. Whether he’s bulldozing his way through the wilds of Scotland’s coastline or kicking Gary Busey to the curb, he’s always managed to skate around the issue of his own repulsiveness by making that somehow his thing. He has almost 2 million followers on Twitter, and you just know at least half of them are hate follows.
In recent months, however, the perennially windswept blowhard has passed through the Rubicon. (Read the rest of Mary Elizabeth Williams  … including how the Brian Williams-Trump feud got started)
-cw
CityWatch
Vol 10 Issue 90
Pub: Nov 9, 2012